Maharaj has been a consistent starting man in South Africa playing XI ever since his debut against Australia in 2016. 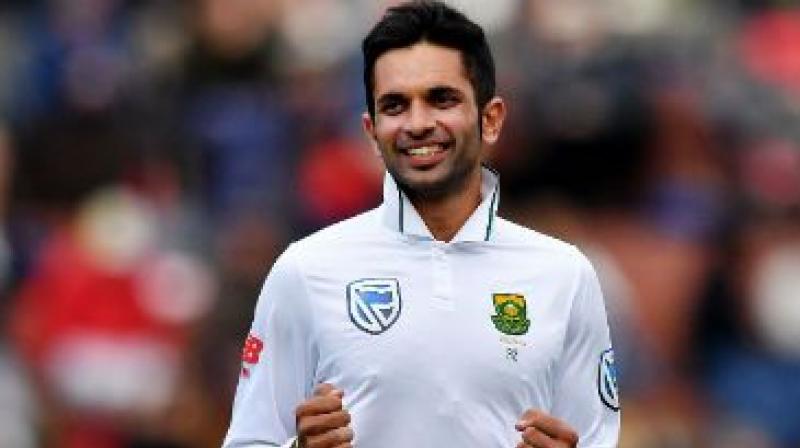 Ahead of the three-match Test series against India, South Africa spinner Keshav Maharaj hopes to seek inspiration from Ravichandran Ashwin and Ravindra Jadeja to showcase consistency for his team. (Photo:AFP)

Dubai: Ahead of the three-match Test series against India, South Africa spinner Keshav Maharaj hopes to seek inspiration from Ravichandran Ashwin and Ravindra Jadeja to showcase consistency for his team.

"It is nice that people speak highly of you. Look at Jadeja and Ashwin. Ashwin has got a lot of variations and Jadeja keeps it simple but the key is consistency and that makes it uncomfortable for the batsmen. I can emulate that going forward and do my job from one end," International Cricket Council (ICC) quoted Maharaj as saying.

Maharaj has been a consistent starting man in South Africa playing XI ever since his debut against Australia in 2016.

Ashwin and Jadeja managed to pick up 54 wickets between themselves when both South Africa and India locked horns in India in 2015.

"You got to expect the ball to turn in the sub-continent and that is why people carry an extra spinner here. As far as bowling to Indian batsmen goes, you can only Test yourself against the best. The series will tell me how good I am and if I belong here in international cricket," Maharaj said.

"Besides spin, reverse swing will be key. Every bowling unit everywhere in the world likes to utilise reverse swing if available. India has got strong bowlers including Mohammad Shami, who is unplayable at times. If it starts to reverse, then we have also got amazing fast bowlers, who can utilise the conditions," he added.

In the recently concluded practice match between Board President's XI and Proteas, Maharaj managed to scalp three wickets. In the game, Aiden Markram and Temba Bavuma scored 100 and 87, respectively.

"It was important that our batters got some time in the middle. They have been working on how to tackle Indian conditions and it is nice to get a hit," Maharaj said.

"If you look at the freshness in the side, there is a hell lot of new faces and that can work for us. There is no point looking back and things may not go our way. But we are here to compete," he added.

India will take on South Africa in the first Test from October 2-6. The series will be a part of World Test Championship (WTC).