Rohit, who got to his fifty before lunch, shifted gears and was particularly harsh on the spinners. 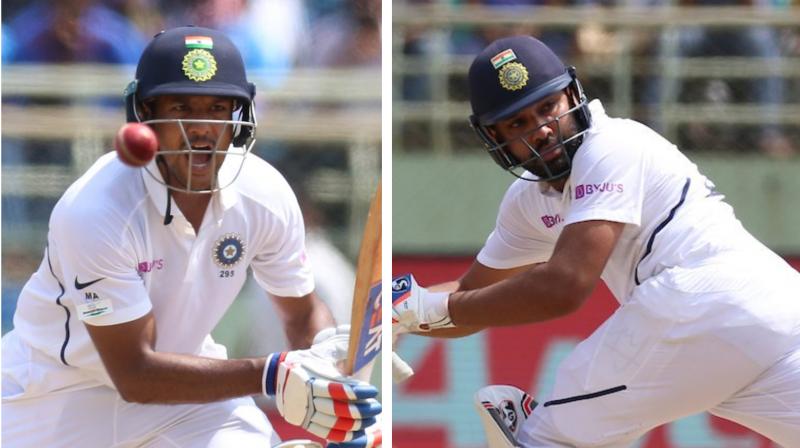 Rohit Sharma made a dream start as a Test opener, scoring an unbeaten 115 off 174 balls to take India to a commanding 202 for no loss at tea on day one of the series opener against South Africa here on Wednesday. (Photo:BCCI/TwitteR)

Visakhapatnam: Rohit Sharma made a dream start as a Test opener, scoring an unbeaten 115 off 174 balls to take India to a commanding 202 for no loss at tea on day one of the series opener against South Africa here on Wednesday.

While South African bowlers did trouble the Indian batsmen on a few occasions in the first session, they seemed toothless in the afternoon session where Rohit and Mayank Agarwal (84 not out off 183) scored at a brisk rate.

Rohit, who got to his fifty before lunch, shifted gears and was particularly harsh on the spinners.

He hammered offie Danie Piedt for successive sixes over deep midwicket to get into the nineties before completing his fourth Test ton with a single off debutant spinner Senuran Muthusamy.

At the other end, Agarwal was cruising towards his maiden Test ton. He too looked assured at the crease and played his shots.

Early into the afternoon session, he brought up his half century with a spectacular six over extra cover off Keshav Maharaj.

Clouds gathered over the stadium towards the end of the session and thunderstorms forced the umpires to take the tea break eight minutes before scheduled time.

Earlier, Rohit and Agarwal played out 30 overs in the morning session after safely negotiating the South African pacers Kagiso Rabada and Vernon Philander, taking India to 91 for no loss.

India, who had named their playing on the eve of the first Test, opted to bat on a dry surface with skipper Kohli calling his decision a "no brainer."

Expecting the pitch to turn, South Africa picked three spinners in Maharaj, Piedt and Muthusamy, who is more of a batting all-rounder.

All eyes were expectedly on Rohit whose stop-start Test career has taken a new direction with the management accommodating him at the top of the order.

He left the first ball he faced before driving Rabada past backward point with minimal feet movement for a four.

His second scoring shot was also a boundary as he punched Philander towards backward point. The pitch offered very little to the pacers and spinners in the first two hours of play.

What worked for Rohit was standing outside the crease when Philander was bowling to negate any little swing that was available.

Rabada has the express pace but he did not test the Indian openers as much as Philander.

Rohit and Philander's battle in the first hour was absorbing. Philander, who got the better of Rohit in the warm-up game, challenged Rohit by moving the ball both ways in his opening spell of four overs.

After a few play and misses, Rohit chose to walk down the pitch before South Africa skipper Faf du Plessis asked wicketkeeper Quinton de Kock to stand up to the stumps.

India reached 37 for 0 in 15 overs with Rohit and Agawal looking solid in the middle.

After getting the measure of the surface, Rohit went for his strokes like he does in white-ball cricket.

His first big hit was a typical one as he gently stepped out of the crease to smash Maharaj over long-on. A little later, he played a similar short off Piedt, only this time the ball flew well above the long-on fielder.

Rohit completed his 11th Test half-century towards the end of the session but in a not so convincing fashion. He mistimed a sweep but fortunately it was not in the reach of the fielder and went for four.