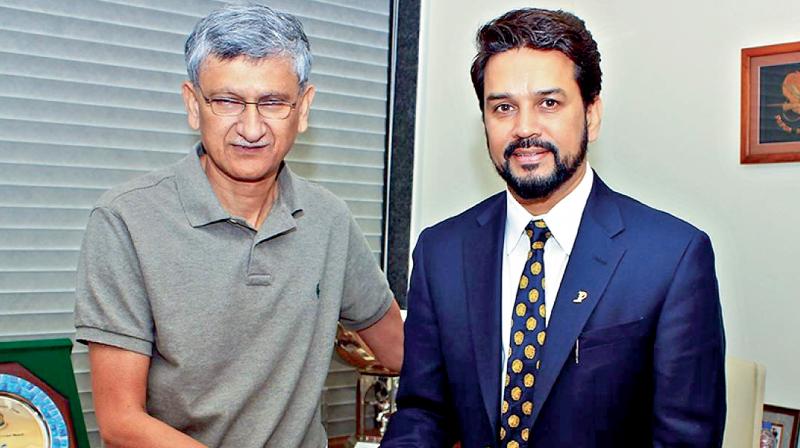 New Delhi: In a huge setback to the BCCI, the Supreme Court on Monday ordered the removal of its president Anurag Thakur and secretary Ajay Shirke and held that they will forthwith cease and desist from holding their posts.

A three-judge Bench comprising Chief Justice T.S. Thakur and Justices A.M. Khanwilkar and D.Y. Chandrachud also slapped notice on Thakur to show cause as to why he should not face contempt of Court proceedings and criminal prosecution for perjury.

The court held that Thakur has by his actions and conduct rendered himself unfit for continuance as president of BCCI. Firstly, he has obstructed and impeded the implementation of the directions contained in the judgment and order of this Court dated 18 July 2016. His own version is that he has been “rendered totally incapable and without any authority” to compel the members to comply with the orders of this Court. This is indicative of his having washed his hands off a duty and obligation to ensure compliance. Secondly, the court said “we are prima facie of the view that Mr Thakur is liable to be proceeded with for contempt of court for having obstructed and impeded the orders of this Court. Thirdly, prima facie we are of the view that Mr Thakur has made statements on affidavit before this Court which are false to his knowledge.”

Accepting the panel’s recommendations, the Bench said a committee of administrators will be appointed on January 19, the next date of hearing to control and supervise the functioning of the Board and till then the senior most vice president will act as president and Joint secretary as the secretary.

The court also disqualified all BCCI and state body officials who failed to meet new norms set by Lodha panel.

The court asked the BCCI vice-presidents to give an undertaking that they will abide by all the Lodha panel recommendations.

The bench in its order said the position as it has emerged before the court is that despite the fact that there is a judgment and final order dated 18 July 2016 accepting the report submitted by the Committee, the implementation of the directions issued by this Court has been obstructed and impeded.

It said “persons who have a vested interest in continuing in their positions in spite of the norms have ensured that the writ of the court is obstructed and impeded. We need to emphasise that the turf of the cricket field is not a personal turf or fiefdom. We must hence order and direct that no person shall hereafter continue to be or be entitled for appointment as office bearer of BCCI or a State Association in breach of the above norms. All existing office bearers of BCCI and of the State Associations who do not fulfill the above norms shall with effect from the date of this Order stand disqualified.”