Tendulkar also admitted to the fact that during his time in the Indian team, the team did not have the right kind of balance like now. 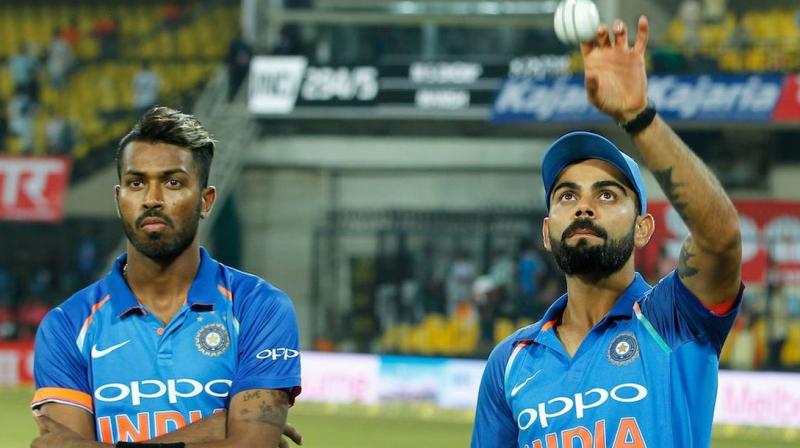 Sachin Tendulkar said that the South Africa series will be Hardik Pandya’s biggest series and skipper Virat Kohli will back the Indian all-rounder. (Photo: BCCI)

The Men in Blue are currently in the rainbow nation, as they prepare to play the first Test against Faf du Plessis-led South Africa side on Friday.

“It will be a good challenge to play in seaming conditions in South Africa and England. It’s about the Indian team and not about any individual. As a team, India is very well prepared,” he was quoted saying to Hindustan Times.

He, however, continued that captain Virat Kohli should play his normal game and stick to the basics.

“Virat Kohli will succeed if the team succeeds. Virat should just play his normal game and stick to the basics. The team should rally around him. India can only succeed if they can put up good totals. Runs will matter and not only Virat, but the entire team has to contribute. So, it’s not only about Virat Kohli,” he continued.

Star batsmen AB de Villiers and Hashim Amla have been in fine form over the years, and he stressed on the fact that the duo must score in every match if the team are to succeed.

“If South Africa have to be successful, then De Villiers and Hashim Amla must score in every match. Du Plessis is the third man in the pecking order, but it’s about De Villiers and Amla. If India can get them out early, then that’s a big job done. De Villiers is the key man for sure. South Africa will now feel the absence of a Kallis, Graeme Smith and Mark Boucher,” he stated.

The former Mumbai batsman also admitted to the fact that during his time in the Indian team, the team did not have the right kind of balance like now.

“In my 24 years with the Indian Test team we never had the balance this team has. The man who brings in such versatility is Hardik Pandya. A guy who can bowl 17-18 overs and is perfectly capable of scoring runs at No 7 or 8 is an asset. This is going to be Pandya’s biggest series and Virat will be banking on him.”

He further stressed on Pandya’s importance in the team.

“For the first time, India can afford to play with three genuine seamers. Never before could we think of three pacers and a fourth one to fall back on -- not even during Kapil Dev’s time could we enjoy this luxury. At best we would play with three quicks with Manoj Prabhakar being one of them. But this team is just so well balanced,” he added.

“I don’t think our players are scared of either pace or bounce. They may have played a lot of cricket on Indian wickets but that doesn’t mean they are not equipped to play on quick surfaces. Our batsmen are mentally very strong,” he said.