Staying out isn’t that bad 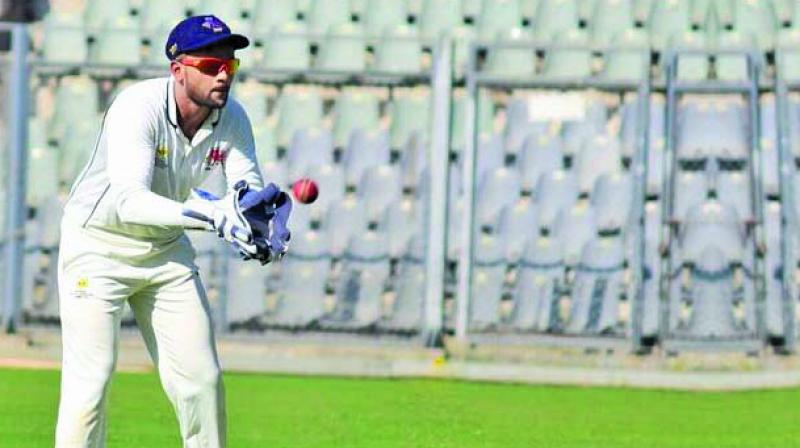 Coming through the ranks, Sufiyan Shaikh burst into the senior Mumbai team, as a young promising cricketer during the 2012-13 season, but five years on, the talented wicket keeper hasn’t got enough chances to prove his mettle. The 27-year-old, who resisted stiff opposition in his household early in his career to pursue his dream of playing Test cricket for India, is still hopeful of getting a full chance to show his credentials despite warming the bench for last three seasons.

“Staying out is not that bad. It allows me to read the game. Cricket is something, which I play with heart. I know I have reached a stage where I can’t afford to sit out for long. But at the same time, one season can be life changing for me. If I get a chance for one (whole) season, I will push myself further,” said Sufiyan, who is known for smart wicket keeping skills.

Sufiyan has played just three first class games, two List A games and four Twenty20 games for Mumbai. All his Twenty20 matches were in Cuttack where he led the new Mumbai side in 2015. Before that, he had made his Mumbai debut in the Vijay Hazare one-dayers in 2014.  Last year, he made the long due first class debut in the Ranji trophy quarter-final against Jharkhand in Mysuru where he affected a record of seven dismissals in one innings including three stumpings. He got a chance only owing to the fact that Mumbai skipper Aditya Tare had a finger injury.

However, during that time, he rubbed shoulders with the likes of Sachin Tendulkar and Ajit Agarkar in the Mumbai dressing room. Sufiyan may be disappointed for missing around 30 first class games and roughly 40 limited overs games ever since he was drafted into the senior Mumbai side, but being a keen learner of the game he looks at the
positives.

“It has been honour to play for Mumbai and have the likes of Sachin Tendulkar in the dressing room. During my first year we lifted the Ranji Trophy (2012-13) under Ajit Agarkar. Later, I made my debut in the 2015-16 season and felt honoured to have played at the quarterfinal. We went on to win another title under Aditya Tare. Yes, sitting out is frustrating at times but it is learning experience at the same time,” he said.

The South Mumbai resident got to play his second Ranji Trophy game against Punjab in Rajkot last season and scored 67 with the bat. Earlier this season, he played against Madhya Pradesh in the opener and batted through (42) with the tail to earn a crucial first innings lead for Mumbai.

“Aditya and I are good friends and competition is always good for cricket. We give good tips to each other,” he added.

Staying on the bench has also hindered Sufiyan’s chances of playing in the Indian Premier League but even the thought of leaving Mumbai and playing for another state hasn’t crossed his mind despite offers. “At the moment, I can’t imagine playing out of Mumbai.  Many advised me to do so, and I also got offers but I want to continue be part of the Mumbai team,” said the cricketer.

Sufiyan’s struggle began during his school days when he had to leave his house early to play matches and later come and face his father who didn’t like cricket and wanted his son to concentrate more on academics. It all changed after Sufiyan represented India during the 2010 U19 World Cup in New Zealand. When it seemed he was close to his dream, he had something else in store for him but still is fighting out.

“My Dad has been supportive since the U19 World Cup. I started earning from the age of 14 and never put too much load on my parents,” said the wicketkeeper who is captaining Tata SC in the ongoing Times Shiled and plays for Payyade SC in the Kanga League.

He is now hopeful to be part of Zonal Twenty20 League (West Zone) starting from January 7 followed by Vijay Trophy one-dayers. “I am working hard to give my best. Though I have played handy knocks with the bat, I want to be more patient and stay at the wicket more,” he said.

Dubbed a street-smart cricketer by former Mumbai coach, Chandrakant Pandit who has seen him during his U19 days, Sufiyan knows it is matter of one chance.

Sufiyan, who entered history books during his knock of 202 not out during the Harris Shield inter-school tournament, and added a staggering 531 runs together with Shishir Tiwari (318) to help his team, Anjuman-i-Islam Allana, post a record total of 1,121 on the board. This included 132 penalty runs due to slow the over rate for their opponents Baptist School.

“Being in the Mumbai squad is a proud feeling. He will get his chances and he has to remain patient. Sticking to Mumbai is the best way forward for him. He is good wicketkeeper and has played some decent knocks but he needs to convert 50’s 60’s into hundreds,” said his school coach Naushad Khan.