Du Plessis said it was the batsmen's job to give the bowlers a decent enough target to defend. “I certainly think we needed 300. 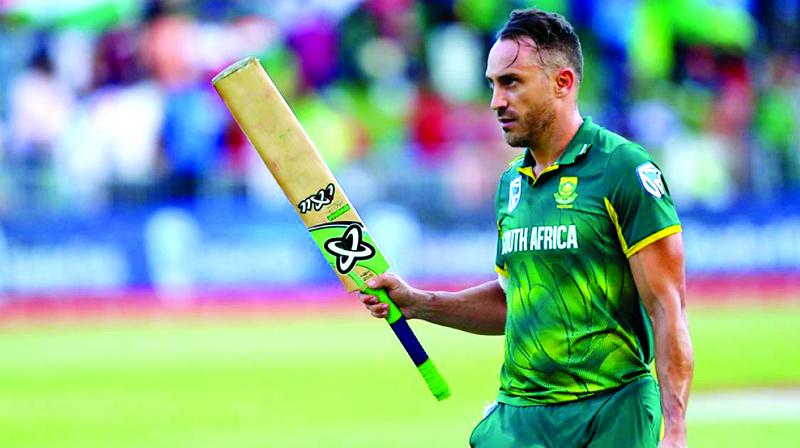 Durban: South Africa captain Faf du Plessis blamed his batsmen's failure to do the most “basic” thing of putting together partnerships for the six-wicket loss to India in the first one-dayer, which ended the Proteas 17-match unbeaten home run.

Du Plessis felt the hosts were 60 runs short after electing to bat first on a Durban surface that progressively quickened up. Du Plessis scored a classy 120, his ninth ODI hundred, but did not get support from the other end as Indian wrist spinners Kuldeep Yadav and Yuzvendra Chahal strangled South African batsmen in the middle overs.

“We didn’t bat well. As a batting unit, for the second top score to be 30 or 40 shows that there weren’t partnerships. The most basic thing about ODI cricket is two guys getting together and putting some sort of partnership together,” Du Plessis said at the post-match press briefing.

“I thought the Indian spinners bowled well but still we should have been better today against them,” he added.

Du Plessis said it was the batsmen's job to give the bowlers a decent enough target to defend. “I certainly think we needed 300.

“260 odd wasn’t enough on that deck. The last two games we played here, we got more runs and won. We chased 370 here against Australia.

“So, I think it’s unfair to say to the bowlers that they were poor. I thought purely we didn't have runs. If we had got 60-70 more, it would have been easier for our bowlers,” he said.

Yadav and his fellow spinner Chahal shared five wickets between them to restrict South Africa to 269/8, a target which India overwhelmed with six wickets in hand to take a 1-0 lead in the six-match ODI series.

Yadav finished with 3/34 in 10 overs and was easily the pick of the Indian bowlers. He bamboozled the South African batsmen with his craft.