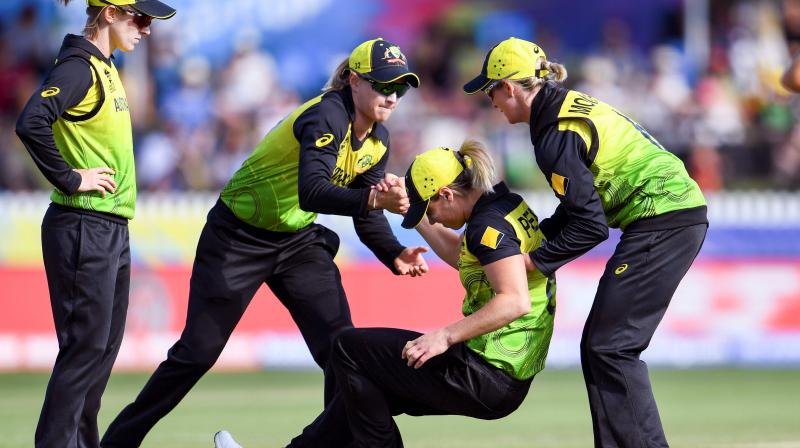 Australia's Ellyse Perry is helped to her feet by teammates after being injured in their Twenty20 women's World Cup match against New Zealand in Melbourne on Monday. AFP photo

Melbourne: Ace Australian women's cricketer Ellyse Perry has been ruled out of the remainder of the Women's Twenty20 Cricket World Cup due to a hamstring injury, ending her run of playing in all of Australia's games since the tournament started in 2009.

The 29-year-old Perry is the No. 1-ranked all-rounder in women's cricket and was last year voted the International Cricket Council's women's player for 2019 -- the second time in three years she'd won the top honor.

She injured her right hamstring while fielding in the win over New Zealand on Monday which secured four-time champion Australia's spot in the semifinals.

Perry is also expected to miss Australia's tour to South Africa later this month.
Australia coach Matthew Mott said Perry was a key player for the defending champions but was confident the squad could lift in her absence.

Perry has a high profile in Australia after playing for the country in both cricket and soccer World Cups, making her debut for the national teams as a teenager.