Karthik’s inclusion saw a rare instance of three specialist stumpers in the XI, M.S. Dhoni and Rishabh Pant being the other two. 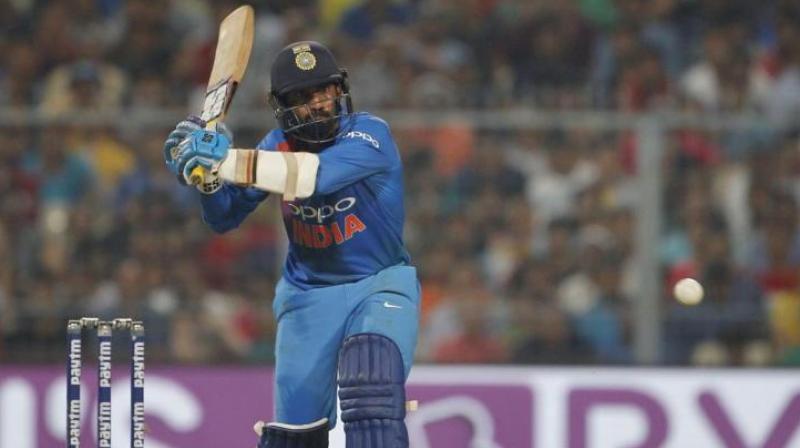 BIRMINGHAM: For someone who is a self-confessed restless man, Dinesh Karthik had to wait agonisingly long for his World Cup debut. And it finally happened on Tuesday when few were expecting it. The 34-year-old Tamil Nadu wicket-keeper batsman, who made his ODI debut in 2004, was part of the 2007 Cup squad, but he didn’t get a game. After missing two consecutive World Cups, he worked his way back into the side for the 2019 edition.

However, Karthik who replaced under-fire Kedar Jadhav in the XI couldn’t really make use of the opportunity as he fell for eight runs off nine balls while trying to accelerate the scoring rate.

Karthik’s inclusion saw a rare instance of three specialist stumpers in the XI, M.S. Dhoni and Rishabh Pant being the other two. For those who were curious about finding who could be Dhoni’s successor, the answer came after the 11th over. When Dhoni left the field to address nature’s call, it was Pant who stood behind the stumps.

Rishabh Pant may have fallen two runs short of what would have been his maiden ODI half-century, but he seemed to have sealed the much-debated No.4 spot by then. He made 32 runs against England on Sunday and looked more fluent against Bangladesh. In the 40th over, he smoked Mohammad Saiffudin for three consecutive fours, a gorgeous shot through covers being the highlight.

Former India all-rounder Yuvraj Singh announced on social media that the team have found their No.4 in Pant. “I think finally we have found our No. 4 batsman for the future! Let’s groom him properly yeah,” tweeted Yuvraj.

Suresh Raina, too, backed Pant to retain his spot. “Our boy @RishabPant777 killed it today. What a confident innings, excellent form,” he tweeted.