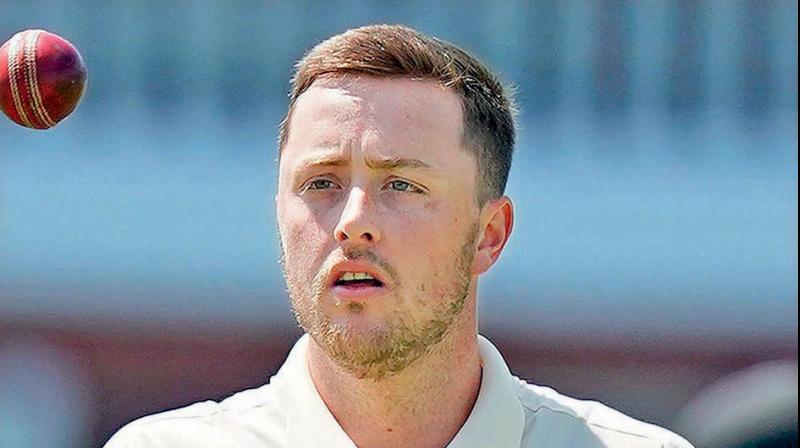 London: Ollie Robinson is free to play for England again after receiving an eight-game ban -- five of them deferred -- for offensive tweets he posted several years ago, the England and Wales Cricket Board announced on Saturday.

The 27-year-old pace bowler will be available for England's forthcoming matches including the five-Test series with India as a disciplinary panel deemed him to have already served the three-game ban.

The seamer was suspended from England duty pending an investigation after historic racist and sexist posts made between 2012 and 2014 re-emerged during his Test debut in the first Test against New Zealand in June.

"Following a hearing on 30 June, the Discipline Commission Panel decided that Robinson should be suspended from playing cricket for eight matches, five of which will be suspended for two years," read the judgement.

"As regards the three matches which are the subject of immediate suspension, the Panel has taken into account the suspension imposed by the England Team from the second Test against New Zealand, together with two of the T20 matches from which Robinson voluntarily withdrew himself from selection for Sussex due to the impact of these proceedings.

The Panel said they took several factors into account in reaching their decision.

"The Panel took into account a number of factors including the nature and content of the tweets, the breadth of their discrimination, their widespread dissemination in the media and the magnitude of the audience to whom they became available," they said.

"The Panel also considered there was significant mitigation, including the time that had elapsed since the tweets were posted, and a number of personal references which demonstrated that Robinson, who chose to address the Panel, is a very different person to the one who sent the tweets.

"It also took account of his remorse, admissions and cooperation as well as the huge impact which the revelation of these tweets and its consequences have had upon him and his family."

Robinson told the panel he is willing to follow their recommendation and draw on his experience to speak at training programmes regarding social media use and anti-discrimination in the next two years.

Following the revelations about Robinson and the uncovering of another England player posting offensive tweets while under the age of 16 the ECB launched a social media review.

The furore affected Robinson to the extent he took a break from the game but has since returned to action.

Robinson -- who performed well with bat and ball on his Test debut despite being in the eye of the storm over the tweets -- received support form other players including Indian legend Sachin Tendulkar.

"We need to understand that he did that many, many years ago and he is sorry about it," Tendulkar told AFP in June.