'Keshav's first experience in cricket obviously started at home in my back yard,' says his father. 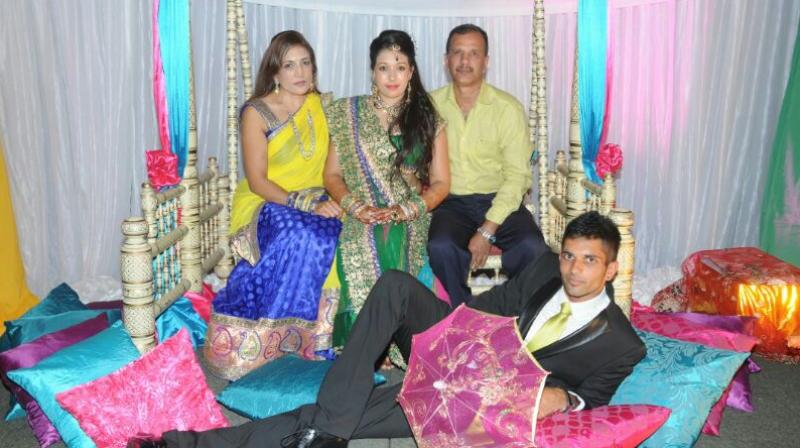 Keshav Maharaj is very caring with his daily mantra ‘Family First’ and is also appreciative of his family.

Mumbai: Family of South African bowler Keshav Maharaj has arrived in India to witness the first two Test matches in Vishakhapatnam and Pune.

"Kesh (as they call him) is basically a grounded family person and I know that having us around will be that extra motivation and support that he needs", the father, Athmanand Maharaj said over the telephone.

"It's good to have family cheering and acknowledging his presence in the team. Further, it identifies us as his faithful fans in terms of support and motivation. And what other place to do so than Motherland Bharat.”

In fact, the three members – his dad, mom Kanchan and fiancee Lerisha had a city tour on the eve of the Test match.

Describing his son journey, Athmanand says, "It started from a very early age. I was playing provincial cricket during the time when no normal sport was played in an abnormal society. We belonged to the South African Council of Sport (SACOS), which was the governing body of the non-racial sport. During my playing days, my son used to accompany me to matches. At times when I was not playing I used to work with him in very limited facilities."

"His first experience in cricket obviously started at home in my back yard. We spent hours together. When unification took place it was easier to find better facilities to enhance the sessions. He was very enthusiastic and he would wait for me to get back from work and take him to the nets. He would bowl left-arm seam in training as he practised. And being a former gloveman I kept to him."

"Later in my career, the cricket fraternity and my fellow cricketing friends used to talk about the scarcity of left-arm spinners. This idea crossed my mind and during a coaching session I gave him a bucket of balls to have a go at left-arm spin. Yes, he was erratic but the convincing aspect of all of that was his ability to turn the ball on a synthetic pitch. So we continued with sessions thereafter while he continued with seam. After a few good practices with spin as gloveman I sat him down and said would he’d like to make a switch because he had the ability to turn the ball. So began his journey and the rest is history. It took many hours of hard labour between us but he withstood the intensity and regularity of the training and coaching sessions".

"Obviously we didn't leave out the batting sessions. Kesh began to impress at an early age at school and club level so much that he was selected to play Provincial schools cricket two years ahead of his age grouping. In so doing the provincial set up put him on the radar for future progress. The interactive sessions didn't stop with him and to which extent that I shortened my playing career and devoted my time to him. In that time he was an ingrained feature in the academy."

"That was how our journey and his career progressed. Mention has to be made with respect to family sacrifices and support, which we still do. I still remain his critic. All in all, he has been an awesome kid with a strong work ethic and focus. While his journey has begun, we haven't focused on a destination".

Describing the other quality of Keshav, his father added, "He is an awesome cook. He also has a food blog and he has also got smart culinary skills".

"He is very devoted to our pet dog Rio, a German Shepherd, who he spoils with a KFC treat now and then. He also supports charity groups and indigent children. He also has a strong religious focus. He’s very caring with his daily mantra ‘Family First’ and is also appreciative of his family", the senior Maharaj concluded.