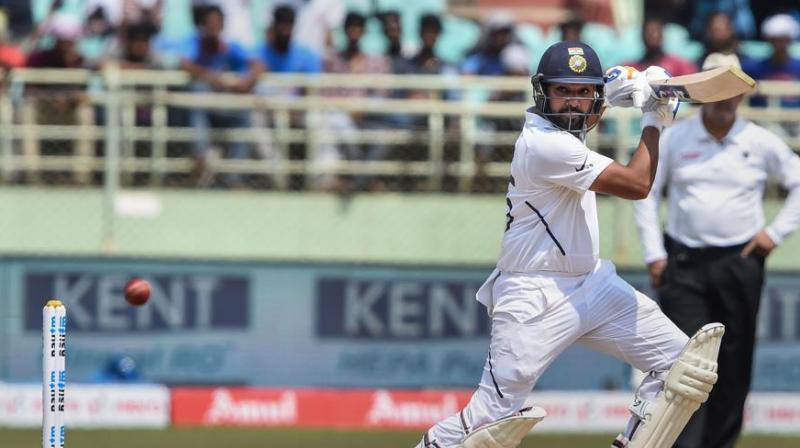 Coming back to the red-ball cricket after a gap of one year, India’s white ball specialist opener, Rohit Sharma slammed 176 and his critics, who raised the question over his ability to strike the red ball. (Photo:PTI)

Mumbai: Coming back to the red-ball cricket after a gap of one year, India’s white ball specialist opener, Rohit Sharma slammed 176 and his critics, who raised the question over his ability to strike the red ball.

Rohit, who last played Tests during India’s tour to Australia in 2017-18, smashed an unbeaten ton on his first outing as an opener in the longest format to enter the record books. Rohit’s 115* guided India to 202/0 until rain intervened in the final session of day 1.

After registering his first Test ton as an opener, Rohit became the first Indian opener to hit centuries in all three formats. Rohit’s first three tons came while playing in the middle-order and this was the first time that he was opening the innings in Tests and he started his innings as a Test opener with style.

At the end of the first day’s play, the 32-year-old said that opening the batting suits his game. “I think it suits my game, just wear the pads and bat. Waiting game, when I used to bat at five or six number, I won’t say it didn’t suit my batting. Your mind is fresh, we know we have to play the new ball. You know the bowlers who are bowling with the new ball do, so the game plan is easier for you."

"You know you have to face the new ball and these will be the fielders. At six, the ball is reversing, field placement is different and you need to keep all those things in mind. That game of wearing the pads and going in to bat suits my game,” added Rohit.