The right-hander whacked five sixes and 22 fours in his innings before getting stumped by Quinton de Kock. 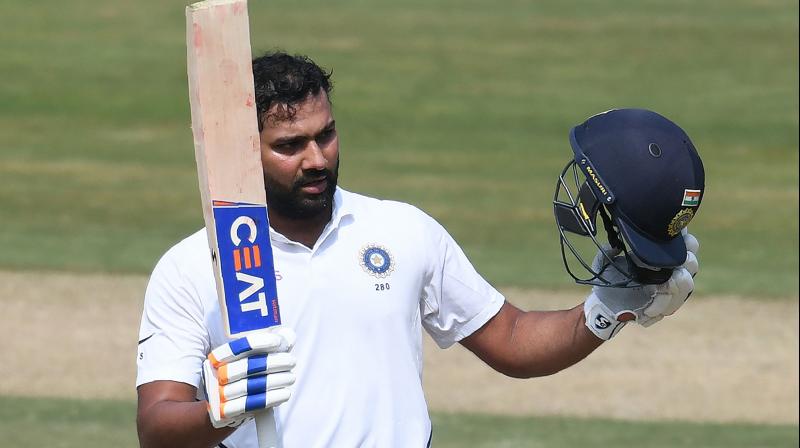 This was Rohit's second 150 plus score in the longest format of the game. (Photo: AFP)

Mumbai: Rohit Sharma smashed 176 runs as India made a strong start on the second day of the first Test match against South Africa on Thursday.

This was Rohit's second 150 plus score in the longest format of the game. The right-hander whacked five sixes and 22 fours in his innings before getting stumped by Quinton de Kock. In the process, Rohit equalled former India great Rahul Dravid's record of hitting the most number of consecutive fifty-plus scores in Tests at home.

Speaking to the media at the end of the opening day’s play, Rohit said: “I wanted to take the opportunity and that’s why I made the management aware of it. I am grateful to them for providing me with the opportunity and I am happy I could score runs.”

“I was very clear in my mind what I wanted to do. The new ball will always do a bit in the initial overs -- whether it’s red ball or white. “I have played cricket in India for a long time now and that’s why I was aware of the conditions and knew that once you get past the first 10 overs, it becomes difficult to get wickets. And it becomes easier to score runs," he further said.

“This was my plan to tackle the new ball and then stick to what I had planned. Backing myself and my game was most important for me because it was all I had in my mind,” he added.