Senior SA players should give back than look for greener pastures, says Vernon Philander

Philander was an important part of the Proteas pace troika comprising Dale Steyn and Morne Morkel, both of whom have retired from Tests. 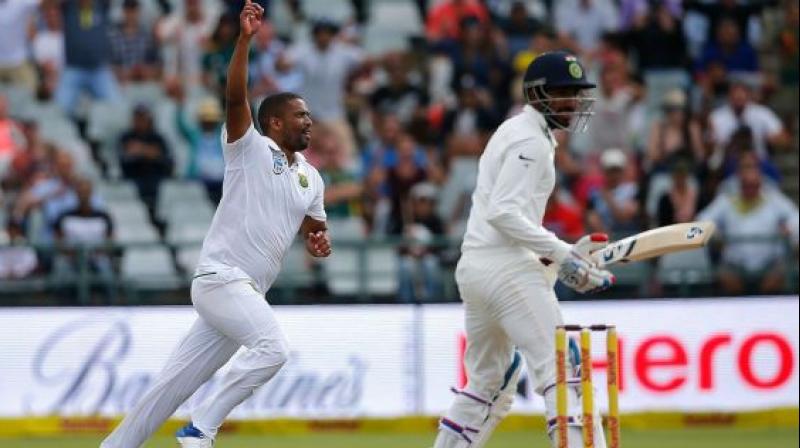 South Africa's most experienced pacer Vernon Philander is enjoying being a 'mentor' in the twilight of his career and wants more of his contemporaries to give back to the game instead of looking for 'greener pastures'. (Photo:AFP)

Visakhapatnam: South Africa's most experienced pacer Vernon Philander is enjoying being a "mentor" in the twilight of his career and wants more of his contemporaries to give back to the game instead of looking for "greener pastures".

Philander was an important part of the Proteas pace troika comprising Dale Steyn and Morne Morkel, both of whom have retired from longer formats.

Morkel in fact is among the list of South African cricketers, who have moved to the England to play county cricket professionally.

"Dale and Morne have been champion bowlers. I am the last one of the so called pack but the new talent that has come through and it excites me. KG (Rabada) has been doing well so far. The bowling depth in South Africa is still pretty good and it is my role to guide the new guys coming through," Philander, who has a remarkable average of 21.64 in 58 Tests, told PTI in an exclusive interview.

South Africa are not the force they used to be across formats and retirements of seniors like AB de Villiers and Hashim Amla have also left a big void in the dressing room.

"I would not say we are a weaker team now. There has been a lot of guys coming through and lot of guys knocks on the doors.

"There comes a time in all our careers that you have to do what is best for you personally. You have to respect those decisions but I think the system is still producing quality players," said Philander, who has taken 214 wickets in his Test career so far.

But rather than choosing the security of county cricket or the glitz of T20 leagues, Philander urged the seniors to "give back to the game".

"However, I would like to see more senior players giving back to the game after retirement. It is easier to find greener pastures but the team needs experienced hands at the moment. Personally, I too have a big role to play in mentoring the youngsters and I am enjoying it," Philander said.

For someone who has been lethal in home conditions, Philander finds it a tad unfair that he is termed as a "green track bully".

"If you look at my record away from home, it is not that bad. The role does differ from conditions to conditions. My role over here in India will still be to take wickets but the spinners play a bigger role here. And we have got to make sure we do our job by keeping it tight," he said.

The control and ability to swing the ball both ways has been Philander's biggest strength and he has achieved roaring success despite not having the pace and variations of Steyn and Morkel. Is pace overrated in that case?

"At the end of the day, you need control. These sort of wickets when you present pace you are presenting an opportunity to score as well. You have got to have that control and I have been fortunate to have that.

"If you have the skill to nip and swing the ball around, it gives you a big advantage at the same time there is no substitute for genuine pace, the batters don't like it."

"So you need an all-round pace attack. I am pretty satisfied with that I have achieved," said Philander, who has picked up 13 five-wicket hauls in Tests.

He said there will always be a regret or two in a long career like his but he has made peace with it. Despite making his ODI and T20 debut in 2007, Philander could only play 37 games in limited overs cricket.

Does he regret not playing more of ODI and T20 cricket for South Africa?

"Not really. I had a chat with Cricket South Africa to extend my Test career. There will always be a regret or two but for me biggest thing is that I have been able to do the job for the team in Test cricket," said Philander, who waited till 2011 for his Test debut.

He is upbeat about the fast bowling resources in his country but when pacers like Kyle Abbott and Duanne Oliver left South Africa for greener pastures, it concerned him.

"Obviously I am concerned. Kyle moved away when three of us (Philander, Steyn, Morkel) were fit to play. It is a loss but he was in that phase of his career were he did not want to wait for too long. He had to make a career choice and you have to respect that."

On the rise of the Indian team, Philander said its fast bowling has come a long way under Virat Kohli's captaincy.

"They have learnt a lot. They have moulded a fast bowling unit to suit all conditions. They have come a long way indeed. Bumrah has set the world alight in the last 24 months."

Lastly, a word on Kohli's often talked about aggression.

"At end of the day, you are playing a sport played amongst men. We should allow people to exhibit themselves, the characters of the game. Sometimes we are too soft as sportsmen. Once you step over the ropes you are there to have a bit of fun and you are there to compete.

"If that is what gets him going, why not? Whatever drives you, whatever gets you the edge as long as it is within the rules of the game."