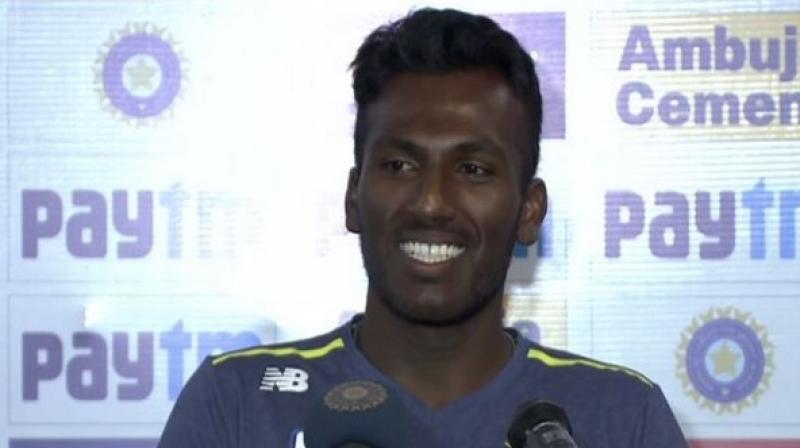 Senuran Muthusamy also stated that they were expecting a lot more turn but the conditions did not favour them. (Photo: ANI)

Visakhapatnam: South Africa bowler Senuran Muthusamy is unfazed with his team's 'legends' retiring from cricket saying that all the new players also have the fighting spirit in their DNA.

"Of course, there have been a few retirements and quite a few legends of the global game have stepped down from the South African cricket. There are new faces and fresh energy in the group but I know that, in our DNA, we have got that South African fight that we are well known for and this is what we will keep doing," Muthusamy said during a press conference after day one of the Test match here on Wednesday.

Many South Africa players like Dale Steyn and Hashim Amla have taken retirement. Steyn announced his retirement from Test cricket in August this year while Amla retired from all formats of the game in the same month. Last year, AB de Villiers bids adieu to cricket.

During the opening day of the first Test match between South Africa and India, the latter displayed brilliant performance with the bat after opting to bat first. The visitors failed to clinch any wicket before the match was called off due to rain. Sharma and Aggarwal are unbeaten on 115 and 84 runs.

Muthusamy also stated that they were expecting a lot more turn but the conditions did not favour them.

"The conditions were not really spin-friendly and we were expecting a lot more turn but it was not the case. But it is always great playing cricket in India and learning and experiencing the culture," Muthusamy said.

Sharma and Aggarwal will continue India's innings from 202 runs on Thursday.