Team India of ‘Angry Young Man’ has some way to go

Dravid said he believes Kohli comes across as “outrageous” and that he would cringe on reading Kohli’s statements before a series. 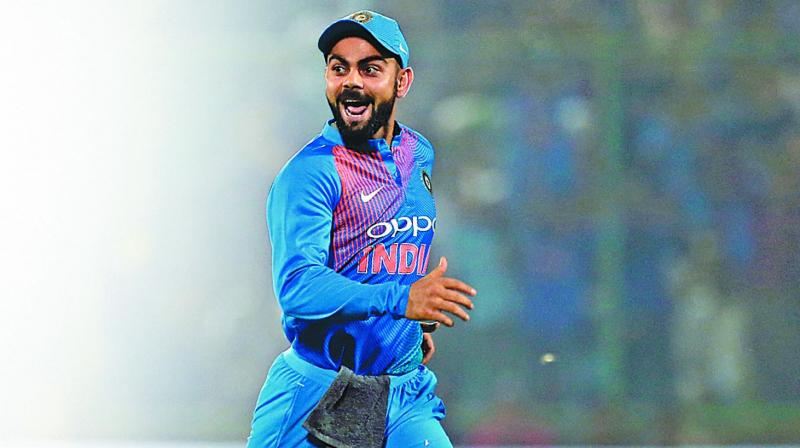 Virat Kohli is destined to end up as India’s most successful run gatherer as captain in all formats even as he is all set to conquer great statistical peaks as a batsman. You could say he began life and career as destiny’s child. Any youngster who can get to the ground on the morning his father died and resume his innings and make a century had to be marked as someone with extraordinary grit and sense of purpose. It’s no surprise then that you have a run maker of the highest calibre in Tests and ODIs (the jury is still out on T20 in which he tends to over hit the ball).

There was one pick-up stroke he played wide of long on that had the stamp of Viv Richards hubris all over it. This was in the Kanpur decider ODI in which Team India needed all the runs they could get on the board on a cracker of a pitch for limited-overs cricket. It was a stroke played with such regal disdain that the tattoos on his arms seemed to get a life of their own. This was as imperious as a batsman could get in stamping his authority on the bowling of the day.

There was another incident which threw a different light on his character. When the New Zealand pair took a single off the penultimate ball leaving 11 to be made off the last ball of the match and series, Kohli made a minor gesture of exultation with both arms, taking them up in the air rather mildly. A more fired-up Kohli would have done much more. The match situation was, perhaps, too tense in the final moments for there to be more relief than a sense of triumph. And yet Kohli has been known to be the one to wear his heart on his sleeve.

Not without reason was he being stamped as the latest “angry young man” of Indian cricket. This is a price the extremely committed must pay, although in Indian captains Kohli is a bit of an exception because few others were so vehemently demonstrative on the field. He seems to wear his emotions like his tattoos, as Rahul Dravid so shrewdly commented while making the point that matches are won as much by players who don’t wear tattoos, meaning a cricketer does not have to be overtly demonstrative on the field to be a winner at the willow game.

Dravid said he believes Kohli comes across as “outrageous” and that he would cringe on reading Kohli’s statements before a series. He did hasten to add, “But if he can bring the best out of himself by needling the opposition, so be it”. It does seem to work for some. Take McGrath’s outrageous “5-0” comments before every Ashes series. In his Nostradamus act, McGrath is more often wrong than right, but it doesn’t stop him from being outrageous.

This inner rage seems to have work well for Kohli, much as it was said to for John McEnroe than whom there was no more overtly angry player. Controlled displays of anger seem to suit tennis players, who are probably more prone than other sportsmen to be emotionally demonstrative on court. The athlete might believe it’s a rage for perfection, although it doesn’t come out so well as a PR exercise since the onlookers don’t like it so much. But then this is the modern era and you have to take sportsmen as they come, warts and all. A Kohli in rage, ranting at team mates’ errors in gestures and exulting in victories is part of the package. This is how he seems to drive himself and his team and he is fairly successful at it.

On the strength of the ODI performances against New Zealand, it would be prudent to say that Team India is not as good as they are made out to be. Sometimes, those within the system have to work this hyperbole, not because they need to whip up the praise in order to earn from the business of cricket, but just that the team’s performance invariably rubs off on them too.  Some of the media comments praising Kohli’s team to be the best ever are quite   exaggerated.

Kohli’s team is certainly not better than some of those in which the Fab Four batsmen plus Anil Kumble and Zaheer Khan figured. Maybe, Australia was too superior then but Team India was a great challenger in the days when the Aussies were kings. Kohli’s team has a long way to go to even be the pre-tournament favourites for the next World Cup. But, given Kohli’s drive and the exposure the youngsters are getting, they could be a more formidable team before 2019.