Sports   Cricket  03 Nov 2019  Delhi T20I: 'Match between India and Bangladesh not called off yet'
Sports, Cricket

Delhi T20I: 'Match between India and Bangladesh not called off yet'

Bangladesh players were seen training with masks for three days straight on the build-up for the match. 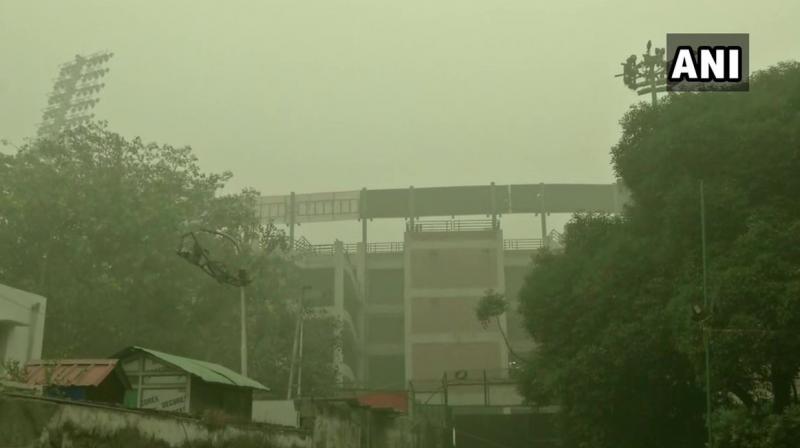 Despite a thick blanket of smog shrouding the national capital, the T20I match between India and Bangladesh slated to be played later today at the Arun Jaitley Stadium has not been called off yet, sources in the BCCI said. (Photo:ANI)

New Delhi: Despite a thick blanket of smog shrouding the national capital, the T20I match between India and Bangladesh slated to be played later today at the Arun Jaitley Stadium has not been called off yet, sources in the BCCI said.

"The match has not been called off yet. It is too early to decide as the match is at 7 pm," a source in the cricket body told ANI.

Due to low visibility, air traffic at Delhi Airport was also affected as of Sunday afternoon with over 32 flights being diverted.

Air pollution levels in the national capital escalated to hazardous and visibility dropped significantly as a thick blanket of smog engulfed several parts of the city on Sunday morning.

Notably, for the first time in this season, the Air Quality Index (AQI) docked as high as 625 at 10 in the morning despite light drizzles in the early hours.

Bangladesh players were also seen training with masks on the build-up for the match. The cricketers trained for three days straight with masks on.

"But there is nothing we can do about it. We have to make sure we prepare and deal with it. We have had little scratchy eyes and sore throat, but no one has been sick yet. We have to play three hours of the game, and we are having three hours practice session and probably this is the maximum amount of time you would want to spend in such a situation," he had added.

In 2017, the Sri Lankan cricket team struggled with the dipping air quality levels and their players were seen with masks on during a Test match in Delhi.

"We know Sri Lanka struggled with it the last time. There's a bit of pollution in Bangladesh as well so it is not a massive shock to the system. Players have dealt with it really well. We have to go about our business. I am not a medical doctor, I am just a coach. It is not ideal as your eyes and throat get sore," Domingo had said.

Bangladesh and India are slated to play the first T20I of the three-match series later today at 7 pm at the Arun Jaitley Stadium.