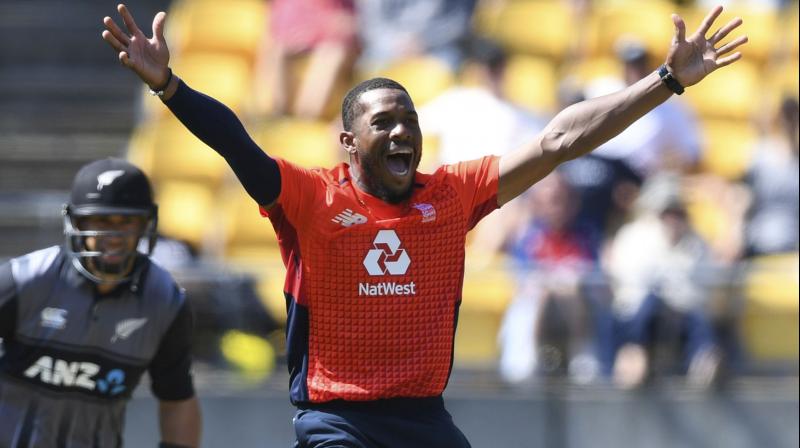 Chris Jordan’s all-around brilliance could not prevent New Zealand from securing a series-levelling 21-run victory against England in the second Twenty20 International of the five-match series on Sunday. (Photo:AP)

Wellington: Chris Jordan’s all-around brilliance could not prevent New Zealand from securing a series-levelling 21-run victory against England in the second Twenty20 International of the five-match series on Sunday.

Jordan claimed 3-23 to help restrict the hosts to a modest 176-8 at the Wellington Regional Stadium after England captain Eoin Morgan won the toss and elected to field.

Jordan then returned to blast 36 off 19 balls, but England could not recover from a top order collapse and were all out for 155 with one ball remaining in their innings.

Put in to bat, New Zealand lost Colin Munro in the third over but opener Martin Guptill made 41 and Colin de Grandhomme and Ross Taylor contributed 28 each to steady the innings.

It was Jimmy Neesham’s 42 off 22 balls, however, that helped New Zealand past the 175-mark.

Dawid Malan made 39 and Morgan chipped in with 32 but England struggled to keep their chase on track.

Jordan clobbered leg-spinner Ish Sodhi for three sixes, injecting fresh life into the contest, but Mitchell Santner stopped the carnage by dismissing the batsman and effectively ending the contest.

“When the fielders are backing the bowlers up, it makes it that much easier,” Santner said of their improved fielding after being adjudged man-of-the-match for his superb spell of 3-25.

“We just needed to improve a little bit in all three aspects (from Christchurch),” he added. “We needed to adapt our plans a little bit but we managed that.”

The teams now move to Nelson for the third match on Tuesday.