Leading on and off field

Kohli’s iconic status was founded on his prowess in limited overs cricket. 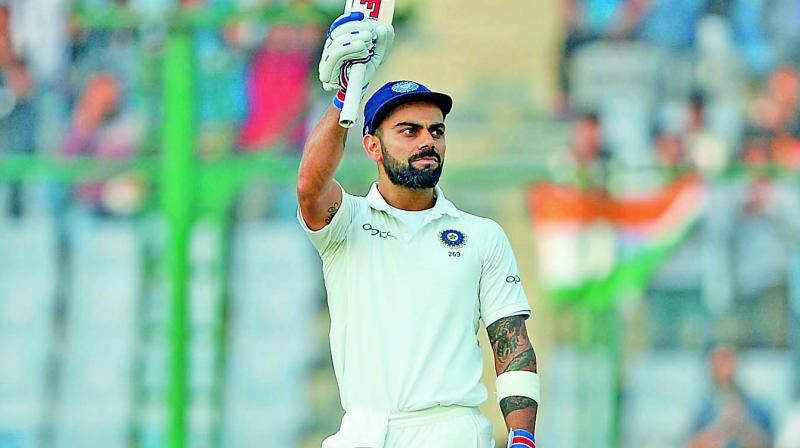 Virat Kohli has been in dazzling form this series. His bat’s been like a blazing magnum. Runs have fairly exploded from it and all bowling — pace or spin — has been fodder as he’s crossed important milestones and set records.

The century at Delhi was his third in as many innings this series. There was an air of inevitability about the last. So true has been his touch, so palpable his hunger for runs, I suspect even the Lankans knew what they were in for once he had got his eye in.

True, Kohli knows the Kotla too well, and the Lankan bowling has been as threatening as a lion without teeth and cotton wool for paws. Even so, such prolific run getting is remarkable for any batsman.

Kohli has 11 Test centuries this year alone. When you consider performances across formats, his career is taking on such extraordinary dimensions that one can but wonder what records will remain unconquered by the time he calls it a day.

But for all his achievements, I believe Kohli’s bigger contribution during the current season has come not in the middle, but off the field when he’s raised several issues pertaining to Indian cricket publicly.

His concern about player fatigue and remuneration precipitated a meeting (Dhoni and Shastri were in tow) with Vinod Rai who heads the Committee Of Administrators. Last week at a conclave organised by the DDCA, Kohli urged young players to devote attention to Test cricket.

I’ll discuss the second event first. Kohli’s iconic status was founded on his prowess in limited overs cricket. His strong pitch for Test cricket is the kind of fillip the five-day format needs in India: not just for budding players but his team mates as well.

From the national team’s point of view, the workload on players and they money they are paid have been the more newsworthy issues of course. More often than not such matters get players and authority into conflict, which makes Kohli’s position even more important.

He spoke of player fatigue at the start of the home season and again during the Test series against Sri Lanka. This prompted the selectors to rest him for the ODIs (I reckon the T20s too), but not without eyebrows being raised. Some former players believe that given his current form, it’s a mistake for Kohli to sit out. He should make the most of it when the going’s good, they argue. But that’s precisely why I think his stand becomes more meaningful.

Kohli’s enthusiasm for the game, hunger for runs and ambition to win has hardly ever been concealed. He’s at the top of his game. He is the fittest player in the side. If he still feels the threat of burnout, his concern must compel attention.

Skeptics have tried to juxtapose the issue of fatigue with the demand for more money from the BCCI, but the two are not linked. The money aspect has to do with a revenue share formula that has either not been honoured or misconstrued by one or both parties.

That this is now a matter of negotiation without rancour — at least as yet — is a big step forward. Kohli’s consistent stand on both these issues makes the missive to the administration clear. Players see themselves as active — not passive — stakeholders in Indian cricket. And he’s in the vanguard of this change.

This reflects a major transition in his cricketing persona. Kohli has moved from being just a player. As captain, he’s obviously in charge, but making a difference doesn’t come only with status.

This can only happen by force of personality, courage of conviction on vexing issues, and a larger vision for himself, team, country and the sport. I detect in Kohli the interest, appetite and responsibility to become the custodian of the game.