Chasing a modest target of 150, the Proteas stuttered in their run chase, but eventually reached the target in 32.2 overs. 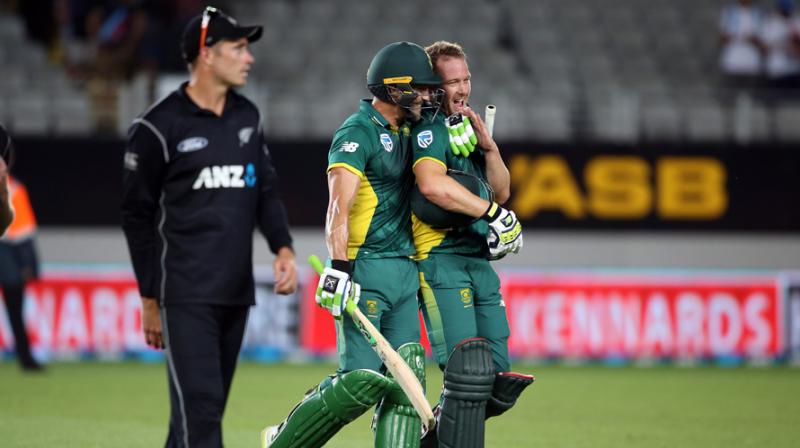 Faf du Plessis (51) and David Miller (45) remained unbeaten and ensured there was no drama during their run-chase. (Photo: AFP)

: South African bowlers came up with a magnificent performance as they defeated by six wickets in a low scoring series decider here at the , on Saturday.

Chasing a modest target of 150, the Proteas stuttered in their run chase, but eventually reached the target in 32.2 overs losing four wickets in the process.

Faf du Plessis (51) and David Miller (45) remained unbeaten and ensured there was no drama during their run-chase.

Having won the toss and electing to field first, the Proteas managed to bowl the hosts out for 149 with Kagiso Rabada (3/25), Imran Tahir (2/14) and Andile Phehlukwayo (2/35) being the pick of the bowlers.

First, it was Rabada, the Man of the Match, who set the things up for the AB De Villiers-led side. He took three wickets and broke 's top order.

Then Tahir, the World Number 1 bowler, produced the most economical 10-over spell by a spinner in ODIs, and never allowed the Kiwi batters to be at ease.

Colin de Grandhomme (32), Mitchell Santner (24), James Neesham (24) and Dean Brownlie (24) were the major contributors to the home side.

With the series win of 3-2, have also retained the top spot in ICC ODI Team Rankings.

The Proteas remained on its pre-series tally of 119 points, one point ahead of . too remained at 113 points in third position, with fourth at 112 points.

had to win Saturday's final match to retain the top spot. Had they lost the match and the series, it would have been edged by on decimal points with both teams on 118 points in such a scenario.