Of patriotism and uniforms

Former captain made the nation proud once again, as he marched down the aisle. 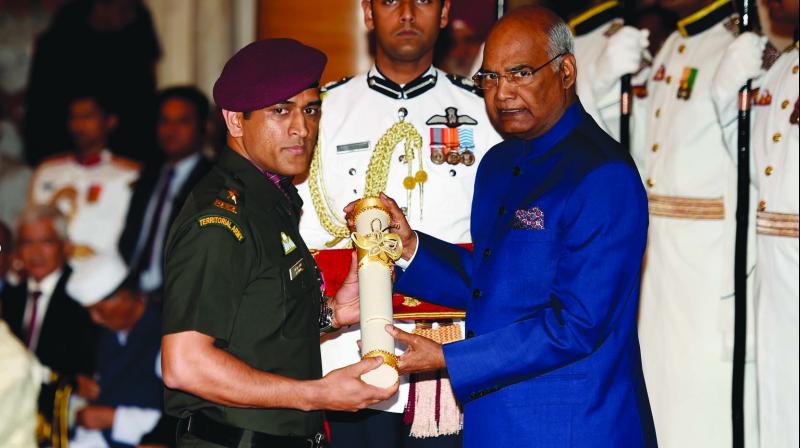 MS Dhoni or rather former ‘Captain Cool’ was conferred with Padma Bhushan, and as usual won a million hearts for respecting the nation’s army by choosing to wear his army uniform. A source of inspiration and motivation, Dhoni proved his love for the nation once again.

And soon the social media was flooded with accolades for the cricketer on having made a great choice of picking the prestigious outfit for the occasion. One of them was Indian cricket team coach Ravi Shastri. “Proper legend. It’s earned not demanded. God bless, Ravi #PadmaBhushan#MSDhoni. (sic),” he wrote on Instagram.

“Uniforms have their own significance. It speaks of the responsibility, authority, the control and power associated with your profession. You are more united in your uniforms. It keeps you motivated towards your work and brings the right attitude and personality required for your job. What could be a better uniform to receive such a prestigious award?” asks fashion designer Sunil Mehra, adding, “Our military is an honour to the country and so is former captain Dhoni. No other outfit would have done justice to this occasion. He looked so graceful and confident when he marched donning a military uniform. An absolute pride.”

Former cricketer Balwinder Sandhu feels that everyone was touched by the gesture. “It was a superb gesture by Dhoni and a matter of great pride for the nation that he received it in the army uniform. It was a mark of respect for the army and I got goose pimples when I saw him receive it. I am proud of him,” says Balwinder.

No one can deny that the former captain expressed his obvious love for the country by wearing the army uniform. “He was already given the post of Lieutenant Colonel earlier and he chose to wear his uniform for the occasion because he took this matter of national pride very seriously and respectfully” says Ayaz Memon, sports writer and author.

For fashion designer Anuradha Ramam, Dhoni’s attire speaks volumes for his pride for the country. “The relevance of the attire speaks undoubtedly about Dhoni’s pride for the country and how proudly he adorns the uniform to receive his Padma Bhushan. This speaks about his dauntless attitude, his zeal and unadulterated patriotism,” she says. The designer is moreover proud of the cricketer for putting the country first.

“I feel so proud of him and my country to have people like him who put our country before everything. It is a matter of great pride for me to be an Indian,” she says.

However, according to designer Reynu Taandon every dress or attire has its own significance and relevance to a particular occasion.

“Every attire carries a cultural and social meaning. For example, you cannot wear a lehenga and go for a formal meeting but you can definitely wear a shirt with pants or a formal skirt. Dressing in proper attire shows how serious you are about making an impression and playing your part. Very few people get to carry the pride of wearing the uniform, and especially while receiving an honour like Padma Bhushan,” she says.

“There is no one in this country more deserving than the legend (Dhoni), to receive the award in the Indian army uniform. Just like the uniform, Dhoni is a symbol of our nation’s pride,” she smiles.

—With inputs from  Angela Paljor