Yusuf was also all praise for his ex-captain Gautam Gambhir, under whom he played some important knocks for the Kolkata side. 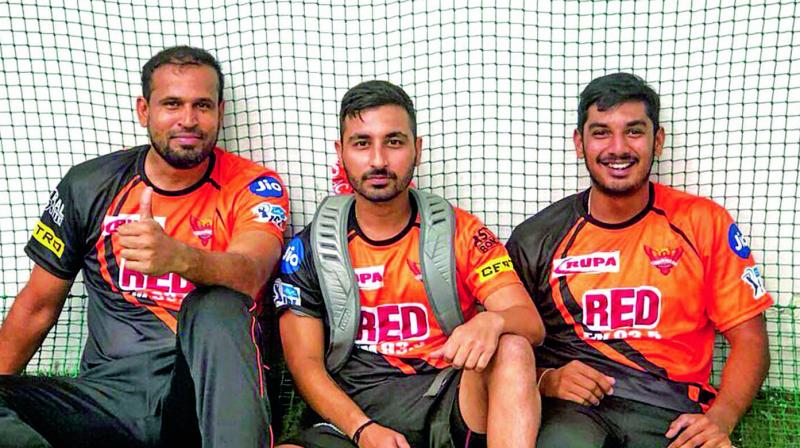 Yusuf Pathan (left) along with his team mates at a Sunrisers Hyderbad training session. (Photo: Twitter)

Hyderabad: It’s no secret that the elder of the Pathan brothers (Yusuf) has the ability to demolish any bowling line-up. But, with odds like age and fitness not in his favour, Yusuf's ticket to the India  team seems to be in the waiting list.

However, Yusuf, 35, who last played for India six years ago, said he has not lost hope of donning the Indian Jersey, once again. “I am training and working hard on my batting and fitness skills. I know it’s a tough road ahead, but if you work hard you will achieve success. I am not in a mood to give up. I will keep fighting,” the explosive right-hand batsman told this newspaper.

Yusuf, who had a seven-year stint with the Kolkata Knight Riders, has shifted base to Hyderabad in this season’s Indian Premier League with the Sunrisers. The Baroda allrounder said, “I am very positive about the new season and looking forward to be a part of the Sunrisers camp where I will get the guidance of legendary players like V.V.S. Laxman, Tom Moody and (Muttiah) Muralitharan. It will be a great learning experience for me.”

Speaking about the team, Yusuf said: “SRH have Manish (Pandey) and (Wriddhiman) Saha in the side, and it will be great advantage for us. My objective will be to strengthen the side's firepower which already has important pillars like (Shikhar) Dhawan, Rashid Khan, Bhuvi (Bhuvneshwar Kumar).”

Yusuf also recalled fond memories of playing in Hyderabad where he smacked an unbeaten 210 in the second innings to anchor West Zone's record 536-run target chase in the Duleep Trophy final against the South Zone in 2010.

“Hyderabad has always been one of my favourite venues. I love batting here. I still cherish those moments when we chased down 536. I am positive about a good batting show here. I have shifted from one champion side to another,” he said.

Asked about his equation with Manish Pandey, with whom he played alongside in KKR, Yusuf said: “Manish and I share a good bond and understanding. We have spent a lot of time batting together in matches and also in the nets during our stint at KKR. So there should not be much of a problem.”

Being an integral part of Kolkata Knight Riders for seven years was a great experience “but my current team is SRH. My focus will only be on how to win matches for my side and play some ruthless cricket,” Yusuf said adding: “Wearing the Orange Jersey and being a part of this army will be a proud moment for me. The logo of SRH is on the left side and will be close to my heart, which in itself is a great moment. I have always believed that teams will keep changing, especially in a league like IPL but as a sportsperson my job is to do the best for my current side.”

Yusuf was also all praise for his ex-captain Gautam Gambhir, under whom he played some important knocks for the Kolkata side. “Gautam is really a fantastic and an aggressive leader. I really appreciate that even when I was struggling, he backed me. When your captain is positive and fierce, he can always extract the best out of you and that is what Gautam is capable of.

“In many matches, he did not perform as an individual or our side posted a low total, but his positive attitude helped us sail through,” the Baroda allrounder added.

When asked about his younger brother Irfan, who did not find any buyer in this year’s IPL auction, Yusuf said: “It was disheartening that he (Irfan) did not bag a contract. Irfan is a sport, he took this positively.”