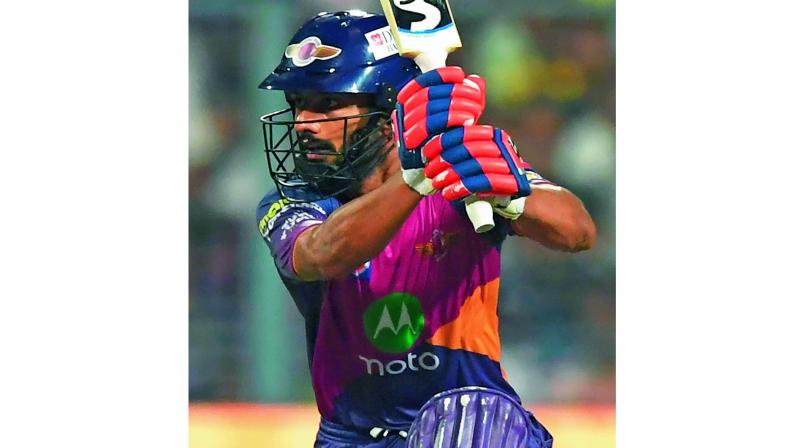 Rising Pune Supergiant’s Rahul Tripathi in action in their IPL match against KKR at Eden Garden in Kolkata on Wednesday. (Photo: PTI)

Kolkata: It was power hitting as its best as Rising Pune Supergiant’s Rahul Tripathi (93, 51b, 9x4, 7x6) turned in a blazing performance to blow Kolkata Knight Riders away in their IPL-10 match here on Wednesday night. Chasing a moderate 155/8, Pune ran out winners by four wickets, in 19.2 overs.

At the centre of it all was Maharashtra batsman Tripathi, who punished the KKR bowlers at will. He first picked on Nathan Coulter-Nile (0/41) as Pune raced to 59/2 in five overs. The carnage continued with Tripathi slamming three huge sixes off Kuldeep Yadav in the 13th over, even as wickets fell around him.

If KKR skipper Gautam Gambhir had been vocal about how Sunrisers Hyderabad’s David Warner had given him nightmares a few days ago — Warner had slammed a hundred to script a whirlwind win over KKR — the home team did not know what hit them on the day.

In the process, Tripathi became the highest run-getter in Powerplays, going past Warner’s tally of 238 and by the time he was finished, Pune had taken a significant step towards the playoffs.

The win lifted Supergiant to the third place behind Mumbai Indians and KKR, on 14 points.

Earlier, Pune dished out a tidy bowling performance to restrict KKR to 155/8. Put in to bat, KKR found the going tough at their backyard and suffered their worst start of the season to be struggling at 55/4.

Their top four, Sunil Narine (0), Gambhir (24), Sheldon Jackson (10) and Yusuf Pathan (4) were all back in dugout midway into their innings.

Unadkat returned with excellent figures of 4-1-28-2, while 17-year-old Sundar too was impressive in his 2/18 from two overs.

Having conceded just six runs in his opening spell of two overs, Unadkat returned to dismiss de Grandhomme in the 17th over in which he conceded one run as KKR struggled to get going.

It was thanks to Suryakumar Yadav, drafted in place of an injured Robin Uthappa, KKR were able to cross the 150-run mark after he smashed 30 off 16 balls.