Chasing 199 to win, England slipped to 101 for six as Ireland’s 19-year-old debutant Josh Little made the most of conditions to claim 4-45. 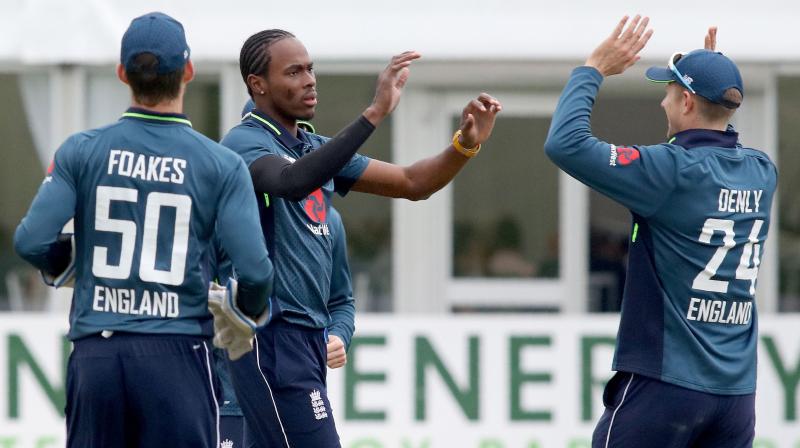 England had won the toss and elected to bowl after the match was put back by two hours and reduced to 45 overs per side amid concerns over a soggy outfield after overnight rain. (Photo: AFP)

Tom Curran and Ben Foakes put together an unbeaten 98-run partnership to help England beat Ireland by four wickets in a one-off one-dayer in Malahide on Friday.

Chasing 199 to win, England slipped to 101 for six as Ireland’s 19-year-old debutant bowler Josh Little made the most of seaming conditions to claim 4-45.

However, wicketkeeper-batsman Foakes scored an unbeaten 61 and all-rounder Curran added 47 not out to give the top-ranked one-day side a scrappy victory.

England had won the toss and elected to bowl after the match was put back by two hours and reduced to 45 overs per side amid concerns over a soggy outfield after overnight rain.

Ireland captain William Porterfield and Paul Stirling made a steady start and were 46 without loss at the end of 10 overs.

But when they had reached 55, England quick Curran lured Stirling (33) into chipping the ball to a diving Jofra Archer at mid-on.

Seamer Liam Plunkett removed Porterfield (17) and Lorcan Tucker (seven) before Curran added a second of his own when Joe Denly caught the experienced Kevin O’Brien (four) at backward point.

The hosts were 111-6 but debutant Mark Adair hinted at a fightback as he smashed two sixes off Curran.

Archer, who conceded 21 runs off his first spell of four overs on his ODI debut, returned to the attack to remove Adair with a 90 mph ball that went clean through the batsman and uprooted the off stump.

Barbados-born all-rounder Archer is among a number of players who, despite being left out of England’s preliminary squad for the World Cup, will be hoping to stake a claim for a late call-up to the tournament starting May 30.

Plunkett, who finished as England’s standout bowler with 4-35, and Curran picked apart the Ireland lower order as the hosts were all out with 11 balls to play.

“At certain stages, we knew it would be challenging, but the bowlers did a great job,” England captain Eoin Morgan said.

“Three or four of us batted really poorly but Foakes was outstanding on debut ... he and Curran got us over the line.”

England next travels to Cardiff for a one-off Twenty20 against Pakistan on Sunday, before the two teams play a five-match ODI series starting Wednesday.