ICC World Cup 2019: Players to watch out for - Andre Russell

The all-rounder is the most frequent six-hitter in the history of IPL, as stats suggest that he slams a six every six balls. 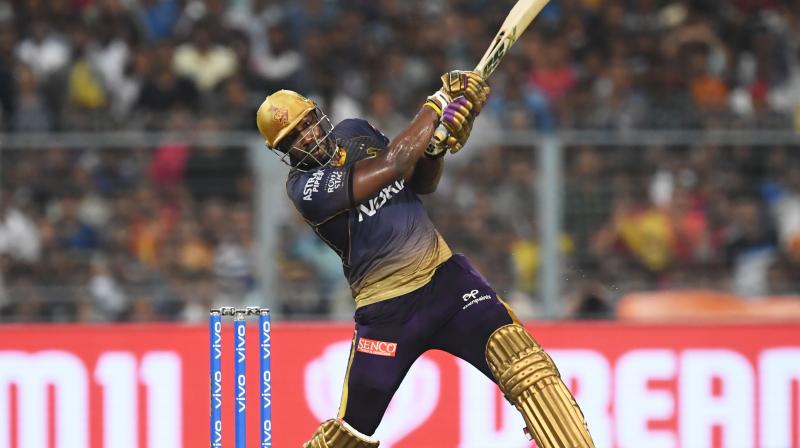 Mumbai: Andre Russell has been in sensational form in the current IPL season, scoring 510 runs in 13 matches. The Carribean giant is known for his sheer power and bat speed, helping him to clear the fence with ease. Russell never fails to incorporate huge sixes in most of his innings. The all-rounder is the most frequent six-hitter in the history of IPL, as stats suggest that he slams a six every six balls. Russell has hammered 52 sixes in just 13 matches while playing for Kolkata Knight Riders this season.

Russell’s dominance is not limited only to the Indian soil. He smashed a century in the Caribbean Premier League century in just 40 balls while playing for Jamaica Tallawahs. Moreover, he also took a hat-trick in the same game. Russell gave the performance of a lifetime in this match and achieved a feat which every all-rounder thrives to achieve in his career.

One of the memorable innings of Russell is when he scored 92 runs in 64 balls against India in 2011. Russell scored half of his runs in the last three overs, putting up 42 runs off the last 14 balls.

Russell is known for his relentless style of batting, attacking the bowler right from the first delivery. He started his IPL career with Delhi Daredevils and was acquired by Kolkata Knight Riders in 2014 for just 50 lakhs, which was a bargain considering his calibre. Four years later after the teams were reshuffled, KKR retained him for a whopping amount of 7 crores. KKR’s investment has certainly not been a disappointing one.

Russell has been the core for the franchise, contributing in death overs in both batting and bowling departments. Russell’s first remarkable innings for KKR came in 2015 against Kings XI Punjab in 2015. He hammered 66 runs off 36 deliveries, comprising 9 fours and 2 sixes, single-handedly earning two crucial points for KKR.

The current IPL season has been the best season for Russell. He played one of the best knocks in IPL history by smashing 48 runs in just 13 balls, guiding KKR to win from a point where they needed 66 runs to win from four overs. Slogging seven sixes, Russell dismantled RCB’s of winning the match. Batting deep inside the crease, Russell is known for punishing the bowler with his wild slogs on the leg side.

Russell has constantly delivered breathtaking performances this season. Another such knock came against Mumbai Indians where he hammered 80 runs in just 40 balls and also bagged two wickets. As always, his fiery knock was dominated by 8 sixes. Despite Hardik Pandya stealing Russell’s show with his 91 runs in 34 balls, Eden Gardens certainly witnessed a lot of fireworks.

Russell has been prominent for KKR in the current season, but the team lost six consecutive matches after starting their campaign with four wins. However, with a win against Kings XI Punjab in their last match, KKR is back on the cards to qualify for the playoffs.

Russell made his ODI debut against Ireland in the ICC World Cup 2011. Acclaimed for his monstrous sixes and aggressive display of batting, Russell also holds a unique record for his bowling. Russell is the only bowler to take four wickets in four balls in T-20 internationals. Russell turned the tables for West Indies while playing against India A, and accomplished this record by sending Yuvraj Singh, Kedar Jadhav, Naman Ojha and Yusuf Pathan back to the pavilion.

Russell has expressed his feeling of being excited and eager to represent West Indies in the World Cup 2019. He will be definitely looking to steer his current IPL form to strengthen the West Indies side. Leading the Carribean all-around department, Russell would be anticipating to improve his record in England conditions.

The 31-year-old has scored 998 runs at an average of 28.51 and has grabbed 65 wickets for West Indies in ODIs. Russell has not scored a single ton in his ODI career, a record which he would be looking to change during the World Cup.