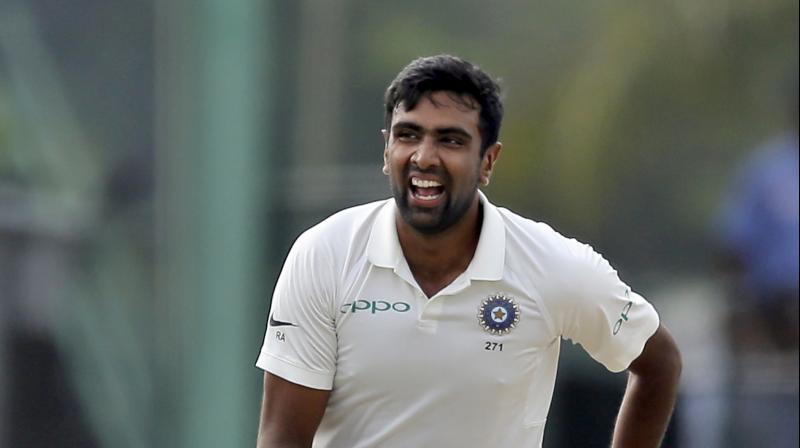 After scoring a half-century in the Indian innings, Ravichandran Ashwin got both the wickets(Photo: AP)

Colombo: India continued their dominance in the second Test against Sri Lanka as they hold the upper hand at stumps on day two.

India, earlier in the day declared at 622- 9 after brilliant knocks from Cheteshwar Pujara (133) and Ajinkya Rahane (132). Wriddhiman Saha (67), Ravichandran Ashwin (54), Ravindra Jadeja (70) and Lokesh Rahul (57) also contributed half-centuries as this helped the visitors to a mammoth total.

For the Sri Lankans, it was Rangana Herath (4-154) and debutant Malinda Pushpakumara (2-156) who starred with the ball.

In the Lankan innings, Ashwin struck early as he removed Upul Tharanga. It was Kusal Mendis who came in right after. However, Ashwin struck yet again as he saw off Dimuth Karunaratne in the 14th over. Captain Dinesh Chandimal and Kusal Mendis will ensure that Sri Lanka reach close to India’s total on Saturday.

Team India declared at 622-9 as Jadeja finished at 70 runs. It will be a huge task for the hosts as they set out to bat in the final session of the day.

Wickter-keeper batsman Wriddhiman Saha kept Team India going even as Ravichandran Ashwin and Ajinikya Rahane departed. However, the Sri Lankan bowlers have displayed a fighting effort to restrict the visitors at least to a total below 600.

Ravindra Jadeja, on the other hand, has been supporting the Bengal batter as he has contributed 37 so far.

Wriddhiman Saha played a calm and composed innings as he clinched his fifth half-century in Tests. The Bengal batsman took his time as he played defensive shots en route to the landmark. He never looked in a hurry as he continued taking the team forward along with Ravindra Jadeja on the other end.

India crossed the 500 run mark as Wriddhiman Saha closed in on his fifth Test fifty. However, Hardik Pandya got out on 20 just before the Men in Blue reached 500.

Ravichandran Ashwin got to his  11th Test fifty right after the second session resumed post lunch. During the course, he also crossed the 2000-run mark in Tests. However, the Tamil Nadu all-rounder departed right after reaching the milestone, after scoring a well-contributed 54. Hardik Pandya came in at number eight, as they inch towards yet another huge total.

WICKET! A rash decision by Rahane. There was no need to go for that shot, as India were cruising along at a decent pace. Pushpakupara floated the ball up, as Rahane danced down the track to play a big shot. However, he completely missed the turn on the ball, as keeper Dinesh Chandimal collected it calmly and whipped off the bails. This was Pushpakumara's first ever wicket in Test cricket.

WICKET! A rash decision by Rahane. There was no need to go for that shot, as India were cruising along at a decent pace. Pushpakupara floated the ball up, as Rahane danced down the track to play a big shot. However, he completely missed the turn on the ball, as keeper Dinesh Chandimal collected it calmly and whipped off the bails. This was Pushpakumara's first ever wicket in Test cricket.

I wouldn't want to be Kusal Mendis, fielding at forward short-leg, today (or rather in this match. While Pujara struck him on the helmet with a pull shot yesterday, a firmly-hit flick by Rahane off Rangana Herath's bowling hit Mendis in the small gap between the shin pads and the boot. That would have hurt really bad. However, a few sprays of the magic-spray does the trick as he gets back up on his feet, to take up his position in front of the bat yet again. Brave man!

WICKET! Sri Lanka got the early wicket that they wanted. a bit of wicket-to-wicket medium pace does the trick for the hosts. Pujara missed the line of the ball, which took a bit of extra bounce, and went on to hit the batsman on the thigh of the back leg. the Lankans went for a review immediately after the umpire ruled not out. the review suggested that the ball would have gone on to hit the leg stump. Decision overturned.

Preview: Team India look to dominate their hosts on the second day of the second Test at the Sinhalese Sports Club, in Colombo, on Friday, top order batters Cheteshwar Pujara and Ajinkya Rahane build on the good progress they made on Day 1.

India, who got a massive 304-run victory in the first Test at Galle, got off to a flying start in the Colombo Test as well, after opener KL Rahul (57) built up the early momentum.

His fifty made him the quickest Indian (18 Tests) to score six half centuries in as many consecutive innings in the longest version of the game.

Although Rahul was run out soon after achieving this feat, followed by the soft dismissal of captain Virat Kohli, Cheteshwar Pujara (128*) and Ajinkya Rahane (103*) carried forward the onslaught on the Sri Lankan bowlers, posting an unbeaten 211-run partnership by stumps on Day 1.