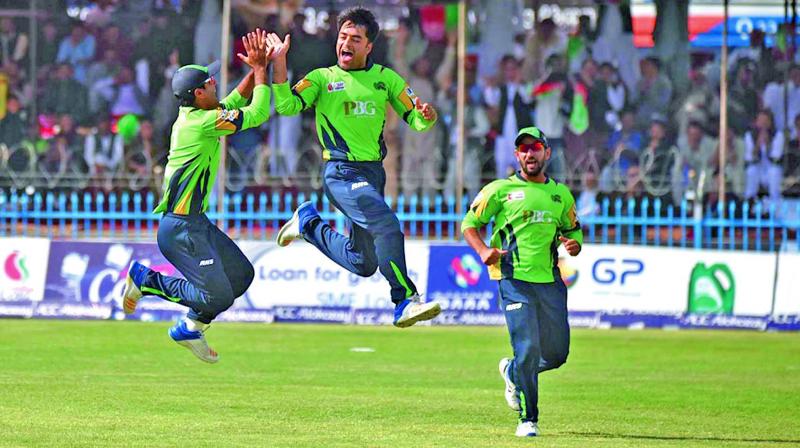 Kabul: Such is Rashid Khan’s popularity that even a suicide blast at Kabul’s main cricket stadium couldn’t keep his fans away — and the teenager is now eyeing the sport’s big prizes as his international profile grows.

The 19-year-old leg spinner started playing with a tennis ball in the remote and poor province of Nangarhar, but he has now starred in the Indian Premier League and will soon make his debut in Australia’s Big Bash League.

At last month’s Shpageeza Cricket League, Afghanistan’s Twenty20 domestic tournament, he became the youngest player to take 100 T20 wickets as he helped the Band-e-Amir Dragons to victory. Khan’s success has helped elevate cricket’s profile in Afghanistan, where most players were introduced to the sport in refugee camps in Pakistan after fleeing the 1979-1989 Soviet occupation.

Even after a suicide bomber blew himself up within metres of the Kabul Stadium, killing three people, Khan’s fans continued to flock to watch him play. They waved the Afghan national flag and chanted songs for Khan, some showing their devotion by painting his name on their bodies.

“I play cricket to bring victories for my country and to make Afghanistan proud on the world stage,” Khan said.

This year, Khan became the first Afghan to play in the lucrative IPL, and he will also be the first from his country in the Big Bash League when he turns out for the Adelaide Strikers in December.

Adelaide Strikers coach Jason Gillespie hailed Rashid’s signing as a “major coup” when it was announced last month. “Rashid has set the world alight in T20 cricket with his energy, enthusiasm, and great control for a young guy,” Gillespie said.

“He has some great variations, can bowl stump-to-stump and can be very hard to pick.”

Khan was born during the Taliban’s 1996-2001 rule, when sport was considered a distraction from religious studies. He learned cricket by studying the techniques of Indian batting great Sachin Tendulkar and Pakistan all-rounder Shahid Afridi on television, and then practising outside in the dirt with his brothers using a tennis ball.

Khan, one of 12 children, began his professional career in Afghanistan’s domestic league where his deceptive bowling technique soon caught the attention of national selectors. At 17, he made his international debut against Zimbabwe.