Senuran Muthusamy and Keshav Maharaj will resume day four for South Africa on their overnight scores of 12 and 3 respectively. 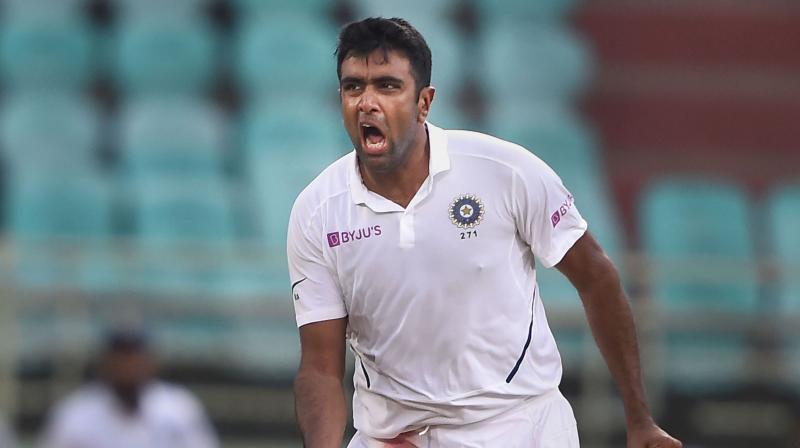 Visakhapatnam: After picking up a five-wicket haul in the first Test against South Africa, India's spinner Ravichandran Ashwin on Friday lauded South Africa batsmen Quinton de Kock and Dean Elgar, saying the credit needs to be given where it is due.

His remarks came after the close of play on day three. South Africa ended the day at a score of 385/8, still trailing India by 117 runs. Elgar played an innings of 160 runs whereas de Kock scored 111 runs.

"He has made a big hundred. We all know how good a player Dean Elgar is. I enjoyed the challenge with him, he played some shots. Elgar has made runs all over the world, he is a fierce competitor," he added.

When asked on why did he stop watching the game for a while, Ashwin came up with a cheeky response as he went on to say: "I have two kids who don't sleep & I got drawn to books & archaeology".

On day three, Elgar was involved in a 115-run stand with skipper Faf du Plessis and then he put up a partnership of 164 runs with de Kock to take South Africa in a position of safety.

Ashwin was not given a chance in the playing XI in the recently concluded Test series against West Indies.

The spinner played for English county Nottinghamshire and the 33-year-old said it was a pleasant experience playing for the side.

"It is very important to do whatever I do. I went back and play as much cricket as possible. With all due respect to everyone, I enjoyed playing cricket wherever I played. I am elated to be back. It is always special to play for India. Taking five-wicket haul always feels good. I make sure I enjoy playing the game wherever I play," Ashwin said.

Senuran Muthusamy and Keshav Maharaj will resume day four for South Africa on their overnight scores of 12 and 3 respectively.