Uthappa saw Rohit make his T20 debut during the inaugural 2007 World T20, which the Men in Blue won by defeating Pakistan in the final. 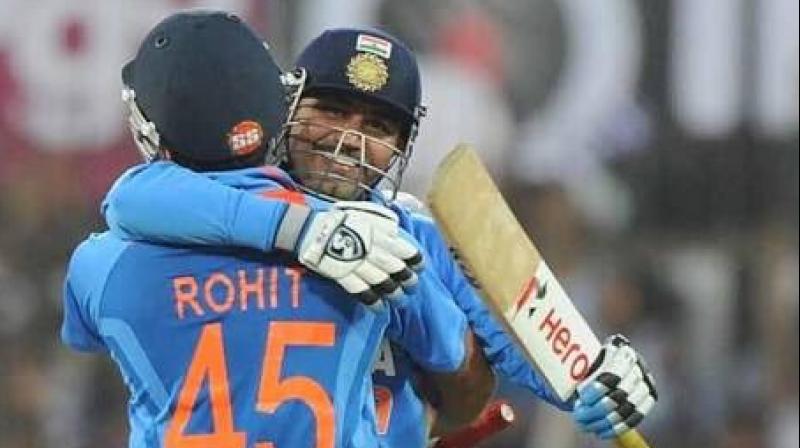 Uthappa also acknowledged Rohit as one of the best batsmen in the world. (Photo: Twitter)

Mumbai: Veteran Robin Uthappa feels Rohit Sharma has been given the responsibility to open for India in Tests at the right time. Uthappa, who has seen Rohit breaking into the Indian team suggested that the Mumbai Indians skipper should replicate his performance on foreign soil too.

Uthappa saw Rohit make his T20 debut during the inaugural 2007 World T20, which the Men in Blue won by defeating Pakistan in the final.

While drawing comparisons with former India opener Virender Sehwag, Uthappa identified a common aspect between both the openers- 'aggression'.

“It’s not right to compare. He has his own style of batting. They are both aggressive that’s the common thread. Viru pa was more a demolisher of the ball while Rohit caresses it. The way they go about dealing with bowlers is vastly different but the aggressive nature in the common factor.”

Uthappa also acknowledged Rohit as one of the best batsmen in the world.

“He has always done well in India and abroad. In white-ball cricket, he dominates the scene right now. He is arguably one of the best batsmen in the world,” Uthappa said on the sidelines of Kolkata Knight Riders’ Plant A 6 Campaign.

“Given that situation, he must be going through a huge surge in confidence. He has reached a point in his career where he understands his batting really well and he knows what works for him and how to approach him."

“I think he has figured out opening the batting and this opportunity came at the right moment for Rohit to capitalise on it. So it’s not a surprise that he is successful,” said the 33-year old who was a key member of India’s 2007 World T20 winning team.

Speaking on Mayank, who Uthappa has seen from his formative years while playing for Karnataka, he said: “It augurs extremely well for him that he has got a double hundred. It’s nice in a way to get his first 100 in India.

“He is a much-improved batsman. I remember we were contemplating dropping him from the Karnataka game and when R. Vinay Kumar gave him a push, he scored a triple hundred and he did not look back from there.