Before India started playing the 1st Test match against SA, there were many questions as to who would be the first-choice wicket-keeper. 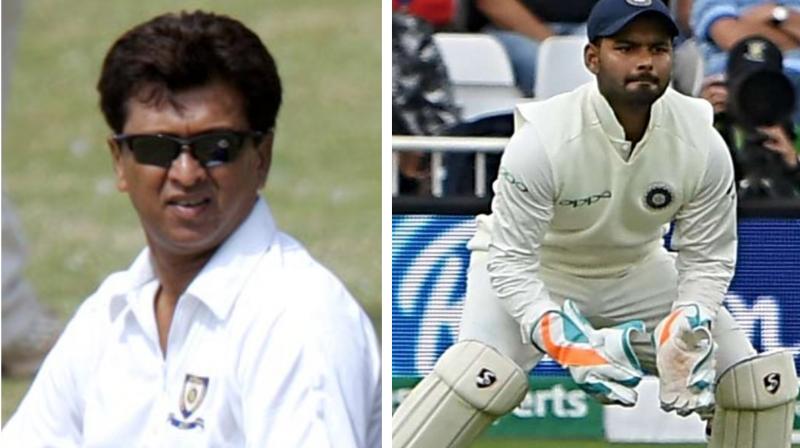 Rishabh Pant, who has been under tremendous pressure, was reportedly dropped from the squad following his disastrous performances in the World cup, West Indies tour and the home T20I series against South Africa. (Photo:AFP)

Mumbai: Before India started playing the first Test match against South Africa, there were many questions as to who would be India’s first-choice wicket-keeper in the first match. Rishabh Pant, who has been under tremendous pressure, was reportedly dropped from the squad following his disastrous performances in the World cup, West Indies tour and the home T20I series against South Africa.

Before the test series against the Proteas began, several reports stated that Indian captain Virat Kohli and head coach Ravi Shastri wanted Wriddhiman Saha instead of Pant to be included in the playing XI for the home series against South Africa. However, the selectors wanted to give Rishabh Pant one more chance.

Nevertheless, those reports ultimately came true after the Virat Kohli mentioned his final team ahead of the first Test match. While addressing the press conference, Virat said, “Yes Saha is fit and fine to go. He is going to start the series for us. His keeping credentials are for everyone to see. He has done well with the bat whenever he has got a chance. It was unfortunate that he was out with an injury. According to me, he is the best keeper in the world. With these conditions, he starts for us.”

After Kohli’s announcement, it became more evident that Saha would be in the playing XI rather than Pant. Also, the critics and fans thought that Pant has been dropped from the squad, but according to sources, the notion of the fans and the critics is wrong.

And, Kohli’s announcement made every critic think that Pant has been dropped from the squad due to his poor performances, but apparently, their notion is wrong as the 21-year-old wicket-keeper batsman is training under former Indian cricketer Kiran More who once had scouted veteran Indian cricketer Mahendra Singh Dhoni.

As per the sources, Rishabh Pant is currently trainer under Kiran More to further enhance his wicket-keeping skills. The sources from the team management also stated that it doesn’t need to explain as to why Saha was included in the playing XI. The team wants Pant to enhance his keeping skills,

In an interview with the New18, the source stated, “There isn’t anything to read into the move and the team feels that Pant just needs to fine-tune his keeping skills a bit when it comes to Indian conditions in red-ball cricket and that is why he has been working with More on those aspects.”

After former Indian wicketkeeper Kiran More was inquired about the youngster, More stated that Rishabh is very talented, hard-working, and is a quick learner. “We have worked on his balance and his hand positioning because he has a terrific cricketing mind and picks things up very quickly. We have worked on small finer details. Hand and body positioning is very important and it takes time. With experience, you learn.” Kiran More said.

In the middle of all the speculation that RIshabh Pant is a weak wicket-keeper, the former Indian captain heaped praise on the Delhi Capitals’ batsman and said, “He has been playing for India for the last one and a half years. Everybody has their perception, but for me, he is ready. You can go through my record after 11 games, he has a fantastic record.”

After having played 11 Test, with 53 dismissals under his name, the youngster’s figures looks quite good, but all he needs is a good knock with the bat also to show his dominance in the Tests.