Speaking to reporters on Thursday, Pintu said he never dreamt that a layman like him would ever be able to meet the country’s cricket sensation. 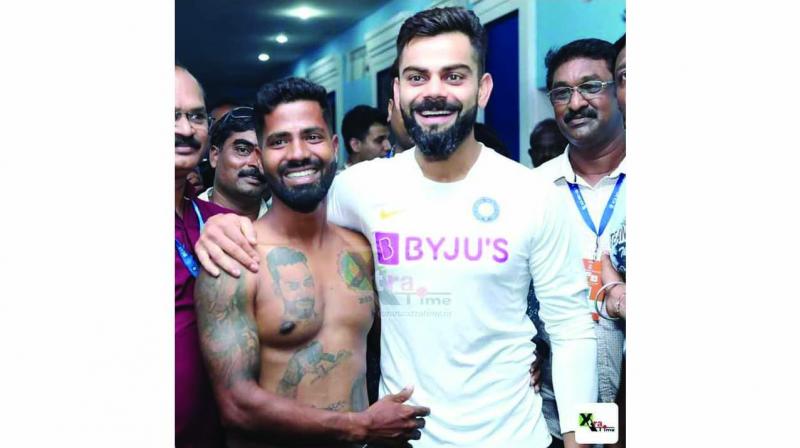 Virat Kohli poses with die-hard fan Pintu Behera, who has 14 tattoos on his body that highlight Kohli’s career so far, in Visakhapatnam.

BHUBANESWAR: Pintu Behera of Odisha is on cloud nine. His long-cherished dream has come true.

A die-hard fan of the Indian cricket captain Virat Kohli, Pintu met his idol on the eve of India’s ongoing Test match against South Africa in Visakhapatnam.

The hardcore Viran fan hailing from Masiakhali village under Kukudakhandi tehsil in Ganjam district of Odisha went topless and displayed the tattoos to Virat during their meeting. He has 14 tattoos on his body that highlight Kohli’s career so far — Virat Kohli’s first name, his jersey number (18) as well as landmarks in his career including the 2008 Under-19 World Cup win, 2013 Arjuna Award and the 2017 Padma Shri.

Speaking to reporters on Thursday, Pintu said he never dreamt that a layman like him would ever be able to meet the country’s cricket sensation. “Virat has many fans who express their love for the legend in many ways. I was just such a mere mad fan. Never did I imagine that he would meet and hug me with so much of love and affection,” Pintu said, adding he has a virat (large) heart.

Virat Kohli met Pintu in Vizag Tuesday and hugged him. “This was one of the precious moments in my life. I had been waiting for this moment for more than three years. I still can’t believe this,” Pintu, a building contractor by profession, said.

“Virat is an amazing person. He not only hugged me but also posed for photographs. I pray to God that Virat, who is considered a run-scoring machine, sets many records,” Pintu said.