Can England rediscover their mojo?

Cook, Joe Root, James Anderson and Stuart Broad, who were on the previous tour in 2012-13, will remember this venue fondly. 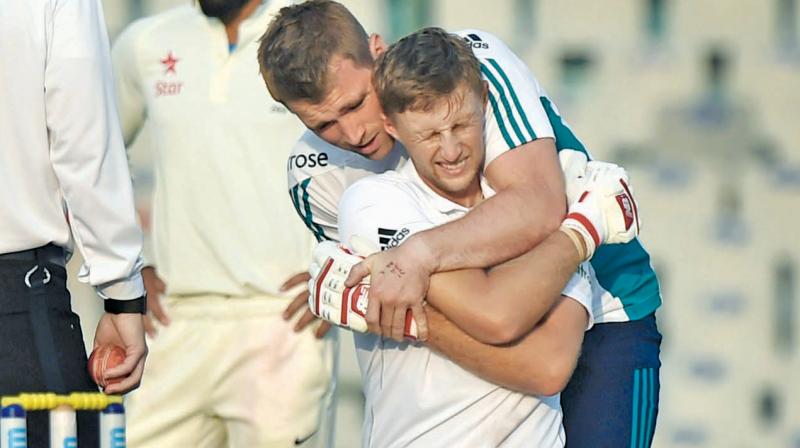 A week’s rest and recreation in Dubai — with desert safari and retail therapy thrown in perhaps — can be a great stress buster. But whether this has also helped England’s players rediscover their mojo will only be known when the Test series resumes in Mumbai next week.

The second half of November had been disastrous for what with two Tests lost on the trot. But with two Tests remaining, the series can still be drawn. And if that happens England retain the rubber, which would be a real big deal.

After an impressive first Test in which they upstaged India, the slump in form has been as ignominious as it has been surprising. That the fourth Test is being played in Mumbai could, however, be a mood elevator for England.

Cook, Joe Root, James Anderson and Stuart Broad, who were on the previous tour in 2012-13, will remember this venue fondly. Those who weren’t, could draw inspiration from the scorecard.

England were trailing 0-1 in that series when the teams faced each other at the Wankhede. At 68 for 2 in their first innings, another crisis loomed, till Kevin Pietersen turned things around with a stupendous, counter-attacking 186 that turned the Test on its head.

Demons about playing spin in India — usually in the minds of overseas batsmen than in the pitches — were slain by Pietersen’s derring do. The Mumbai Test won, England went on to win the series 2-1: the only time India have been beaten at home since 2004.

England have suffered in the current series because they opted for attrition over controlled aggression after winning a huge psychological advantage in the first Test. This allowed India to find their bearings and turn the tables on them.

Not making an attempt to dominate the bowling was inviting trouble. To get the better of Indian spinners on Indian pitches, it is imperative to take the attack to them. Dour defence as a tactic can work only in brief spells.

True, there is no batsman with the strike ability of Pietersen in the present team. But Root (particularly), Ben Stokes, Johny Bairstow, Moeen Ali and some new faces — with Cook playing fulcrum — is not a low grade batting unit.

There is risk for sure, but an enterprising approach is possibly the only way lost ground can be covered. That said, form and statistics weigh heavily in India’s favour.  Two wins have enhanced India’s lead in the ICC Test rankings that Virat Kohli would be loathe to squander.

Given his mindset and track record, I reckon Kohli will want his team to get even more combative. Apart from the momentum, he also has the players — supported with with impressive stats -— to wind the series handsomely.

With a well-rounded, potent attack and a productive batting line-up (notwithstanding the poor form of M Vijay and Ajinkya Rahane), Indian cricket has never looked better and stronger. How ironical then that the BCCI should be at its most vulnerable at this point?

The long awaited Supreme Court final order on the Lodha committee’s recommendations hangs like Damocles’s sword over BCCI. However, confabulations with state associations on Friday before Monday’s crucial meeting with the SC bench saw no shift in the Board’s position.

Do Anurag Thakur and Co have a clinching counter-argument or will Indian cricket, as it was structured for eight decades, be dissolved as Justice Lodha has demanded?

How the SC will decide is moot. But all cricket followers — in India and elsewhere — will hope that the prolonged, excruciating suspense finally ends.