Earlier on November 27, Mithali, in a letter to the BCCI, had accused Powar and CoA member Diana Edulji of discrimination. 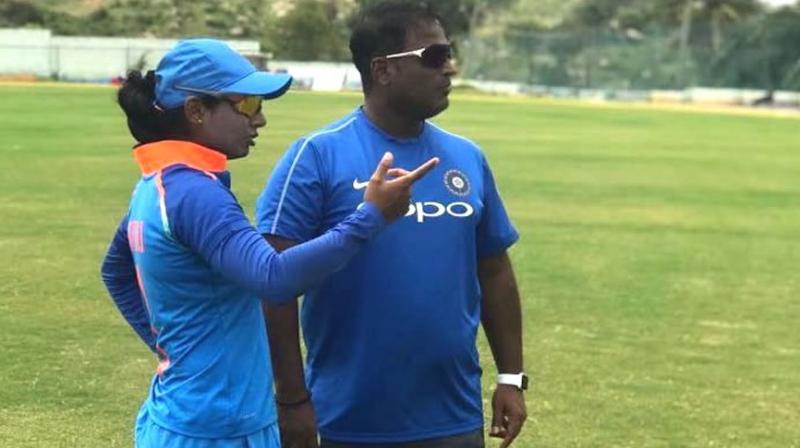 Discussing the improvement in the team under Powar, Harmanpreet said: "Our team has gone under positive changes in the past few months and has set a benchmark in the world top teams." (Photo: PTI)

New Delhi: Reacting to the Board of Control for Cricket in India (BCCI's) advertisement for the post of India women's team coach, T20 captain Harmanpreet Kaur and her deputy Smriti Mandhana on Monday have written to the board and Committee of Administrators (CoA) appealing that Ramesh Powar should be allowed to continue as the head coach.

"I as the Twenty-20 captain and One-Day vice-captain is appealing before you to allow Ramesh Powar to further continue as our team coach. There are hardly 15 months for the next T20 World Cup and a month to go for the New Zealand tour. The way he has transformed us as a team, I feel no reason to replace him with any better at this point in time when the team is coordinating well with him and amongst each other. It takes a while to understand and select combinations and equate a coach's temperament," Harmanpreet said in a letter addressed to the BCCI.

Meanwhile, Smriti said: "His guidance and inputs will be helpful for the team to perform well for the upcoming New Zealand tour and next T20 World Cup in Australia."

Talking about the ongoing controversy between Powar and ODI captain Mithali Raj, Harmanpreet said, "Another change of coach will affect our growth and we will have to start from scratch. And whatever may be the reason for Ramesh Powar's and Mithali Raj's conflicts, they should solve it across the table like a family and call it a truce. This will provide more sense and security to them and the entire team."

"Our defeat in the semi-finals was very disheartening and it brings us all to feel more miserable, to see how the controversies (post world cup) has stained our image and questioned the entire cricket fraternity," Harmanpreet added on India's semi-final clash against England, where India lost by 8 wickets.

"Ramesh Powar was not single-handedly responsible. The decision was entirely based on the cricketing logic and observations from the past. Keeping in mind the need of the hour where me, Smriti, the selector (Sudha Shah) and the coach together in the presence of our manager felt that we should go ahead with the winning combination. And I believe it should have come to your understanding that the intent was not personal but entirely based on the welfare of the team," Harmanpreet said on the decision to keep Mithali out of the playing XI.

On the other hand, Smriti said: "It is important for Indian cricket's growth that everybody is on the same page and I believe that any differences can be amicably resolved via discussions."

Discussing the improvement in the team under Powar, Harmanpreet said: "Our team has gone under positive changes in the past few months and has set a benchmark in the world top teams."

"Since the introduction of our new coach Ramesh Powar, he along with the support of the staff has boosted our confidence as a team which helped us win 14 consecutive T20 matches before semi-finals. Ramesh Powar has changed the intent of players and given everyone confidence to express their selves on the field to their fullest. His one to one connects with each player has led to clarity in roles for all players and made everyone believe that they are match-winner in his short tenure with the team," Smriti added.

Earlier on November 27, Mithali, in a letter to the BCCI, had accused Powar and the Committee of Administrators (CoA) member Diana Edulji of discrimination.

In his defence, Powar, in a ten-page report entirely focused on Mithali, had stated that ODI captain blackmailed to retire midway through the ICC Women's World T20 in the West Indies after being denied the opening slot.