In less than six months, Labuschagne’s batting has taken on a trajectory that can only be described as extraordinary. 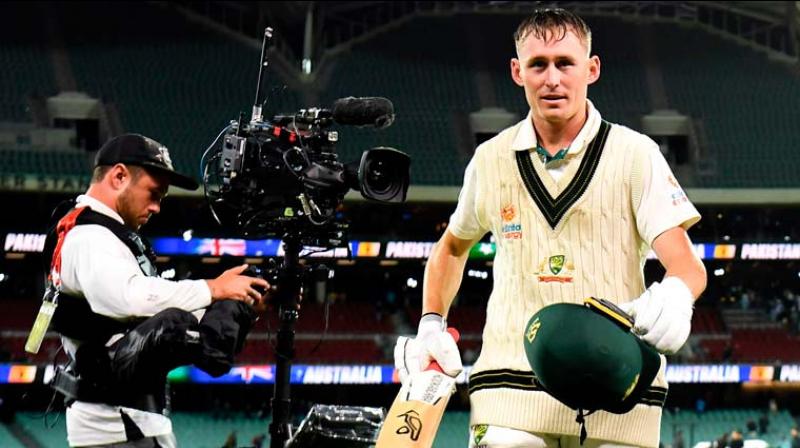 Marnus Labuschagne made his Test debut against Pakistan in Dubai just over a year ago. He was dismissed for a second ball duck. Less than six months back, he was on the reserves bench, unsure of breaking into the playing XI, or of retaining his place in the squad.

Injury to master batsman Steve Smith in the second Ashes Test at Lord’s gave Labuschagne a lifeline to redefine his career. Under the newly introduced law on substitution, he could now bat even though not part of the original playing XI.

Labuschagne made a doughty 59 to ensure a draw for Australia. This earned him accolades as well as a regular place in the playing side. Wallowing in the gloomy shadows of existential strife till then, his career emerged into sunshine and glory, as it were.

In less than six months since the Lord’s Test, Labuschagne’s batting has taken on a trajectory that can only be described as extraordinary. In his last 10 innings, he has made six scores over 50. Four of these scaled the three-figure mark, including 215 against New Zealand on Saturday.

There are some other stats too about his batting that can leave one reeling. For instance, Labuschagne is now the fifth highest run scorer in the history of the game with a whopping 1400 runs after 22 innings in 14 Tests.

Those above him are Australian Don Bradman (2115 runs), England’s Herbert Sutcliffe (1611), West Indian Everton Weekes (1520) and Australian Arthur Morris (1408), a roster of batsmen who enjoy legendary status in the game.

In cricket parlance, the form Labuschagne’s shown in recent months is called ‘Bradmanesque’. The Don, with his amazing run scoring ability and incredible average remains the ultimate frame of reference for batsmen, and to be even considered in that light is an honour that every batsman craves.

In more human and tangible terms, Labuschagne’s prolific run-getting in the last three series he’s played in — against England, Pakistan and New Zealand — has seen him climb in the ICC Test rankings (for batsmen) with leaps and bounds.

He is currently at no. 4 behind Virat Kohli, Steve Smith and Kane Williamson. This affords a good perspective of the promise he holds, for the three above him are rated as the best batsmen in contemporary cricket.

Till recently, these three plus Joe Root were in a quadrangular race for the top honour in Test batsmanship. Suddenly, there is a fifth contender too! This not only gives the contest a fascinating fresh dimension, but also makes the game richer.

Labuschagne’s success has come as a massive booster shot for Australia. Struggling through most of 2018 after the shocking ball tampering controversy that saw Smith and David Warner cop a one-year ban, the Australian team is now looking top class.

The batting had particularly suffered in the absence of Smith and Warner. This had an adverse effect obviously on the morale of the side as well as results. Now both are back and not looking any the worse for the one year they had to sit out. In fact, they seem hungrier.

But what’s perhaps making the vital difference in the batting is the sparkling brilliance of Labuschagne. Till his sensational sequence of runs began, the Australian batting looked fragile and vulnerable, despite Smith and Warner.

Now it’s not only looking strong, but intimidating. In fact Smith and Labuschagne have developed a chemistry that reminds one of Dravid and Laxman, Sobers and Kanhai and other such fabulous partnerships from the past.

The challenge for precocious youngsters is always whether and how long they can sustain such form. Cricket history is replete with examples of batsmen who binged on runs for a series or two, then faded away, for some reason or the other.

Flash in the pan success is not uncommon, which is why those who stay the course, as it were, with a high degree of success, are the true ‘greats’. Longevity of career is of the essence, in batsmen or bowlers. This is the real test of talent, temperament and character.

This is the crucial examination that awaits Labuschagne.