Miserly India claw back into Bengaluru Test with 6 Aussie wickets

Spinners Ravichandran Ashwin and Ravindra Jadeja took a wicket each as India dominated an intense opening session on day two. 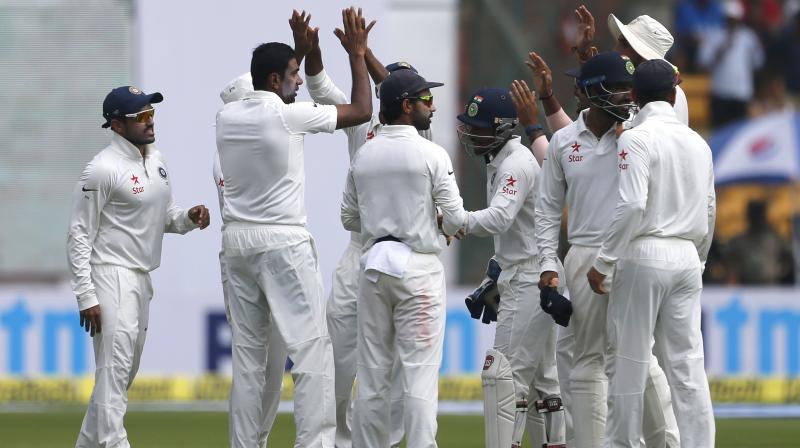 R Ashwin picked the first wicket of the day as he dismissed David Warner. (Photo: AP)

Bengaluru: After struggling on the first day, India made a strong comeback  to claw their way back into the match, taking six wickets, as Australia put up 237 on the board at stumps on the second day of the Test match at the M Chinnaswamy stadium in Bengaluru, on Sunday.

However, the Indian bowlers came out with a concrete plan to bowl a tight line and length against the Aussies.

While the visitors applied themselves brilliantly to stick around and score slowly at 2.23 runs per over, India managed to pick up six wicket, with spinner Ravindra Jadeja being the pick of the lot.

Ravindra Jadeja took two wickets in the middle session and Ishant Sharma struck with the last ball to keep India in contention as Australia grafted to 163-5 at tea on Sunday, just 26 in arrears on the first innings.

The Australians resumed on day two at 40 without loss and on a high after bowling India out for 189 and coming off a comprehensive 333-run win in the first test at Pune.

Jadeja and Ravichandran Ashwin took a wicket each in an intense morning session, when India conceded just 47 runs in 29 overs and picked up the valuable top-order wickets of captain Steve Smith (8) and his deputy, David Warner (33).

Matt Renshaw held the top of the Australian innings together in a patient, 196-ball innings that included partnerships of 52 with Warner, 30 with Smith and 52 with Shaun Marsh before he went on the attack and was stumped off Jadeja's bowling.

Renshaw's 50 came off 183 balls and contained five boundaries, and was the fourth time the 20-year-old opener has crossed 50 in his nine test innings.

He went down the pitch against Jadeja and hit him over mid-off for six to start the 67th over but was out two balls later, stumped when he tried to advance again and the Indian spinner saw him coming and darted a ball down legside to the wicketkeeper.

Jadeja picked up another wicket 10 overs later when he tempted Peter Handscomb (16) into hitting over mid-wicket, but the Australian No. 5 miscued and Ashwin took a diving, juggling catch to make the total 160-4.

The Marsh brothers batted together for three overs before paceman Sharma got his first wicket of the match with a ball that kept low and hit Mitch Marsh (0) just in front of leg stump.

It was the last ball of the session and with the old ball, meaning India has the new ball available to start the evening session and Australia will have a new batsman at the crease. Shaun Marsh was unbeaten on 38 from 127 deliveries at the interval.

Jadeja's 3-32 was the pick of the bowling figures, although Ashwin has done the bulk of the work with the ball and returned 1-61 from his 34 overs.