India vs Australia: 8-pack Lyon is over the moon

A scalp that holds great value to the Aussie who took his tally to 13 wickets in the series so far. 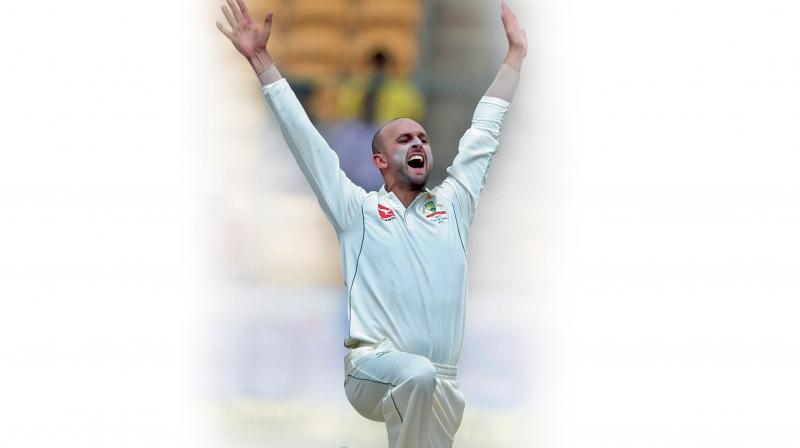 Nathan Lyon celebrates a wicket on the opening day of the Bengaluru Test. (Photos: Satish B.)

Bengaluru: Consistency and patience are the hallmark to success. Nathan Lyon knows that. Nathan Lyon proved to be just that.

In many ways it was similar to the first Test in Pune. The Australian spinners weaving their web and Indian batsmen struggling to get out of the labyrinth.

It was Steve O’Keefe then. It is Lyon now. On a day when things could have gone so differently with India winning the toss and opting to bat, the off-spinner triggered a collapse that saw the hosts stagger their way to 189.

With return that reads 8/50, Lyon now holds the best figures for any overseas bowler in India.

“I’m over the moon with what happened today. It’s the toughest place to play cricket,” said the smiling Aussie.

“I’m very lucky to be able to take eight wickets — that’s for sure — but there’s still another 10 out there that we need to take as a team. It’s all about Australia’s success; We’ve got that belief in ourselves and the atmosphere in the change room is unbelievable at the moment.”

The 29-year-old cajoled, prodded and probed the batmen with his turners and the odd ones that went straight for the better part of the day. The most damning one perhaps being the one that removed Virat Kohli.

A scalp that holds great value to the Aussie who took his tally to 13 wickets in the series so far.

“To take his wicket was exceptional. We know this is a long and massive series and we expect him to bounce back. But obviously he is the head of the snake if you want to put it in Dale Steyn’s terms,” he said.

“I’m just landing the ball on the same spot. That’s what you have to do here in India,” he said.