Shades of O’Keefe from Pune? No, way, Aussie’s premier spinner Lyon showed him who the boss was. 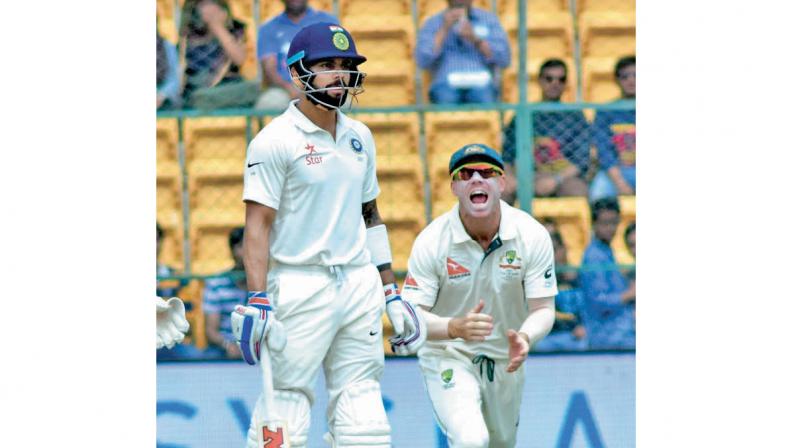 Bengaluru: With the toss going in his favour, Virat Kohli was contented in more ways than one.

A fresh start and getting to bat first on a wicket that he believed was ‘typical’ gave him and the Indian team the confidence they needed to pull level with the Australians.

But Day One of the second Test at the M. Chinnaswamy stadium showed how fickle predictions could be, and how even cricketers, whose bread and butter is the 22 yards and thereof are made to feel gullible by the intricacies of the turf.

Opting to go with a seventh batsman in home boy Karun Nair instead of offie Jayant Yadav, skipper Kohli was left mortified as the ‘typical’ wicket proved insanely different from what he expected it to be.

Home lad KL Rahul was at the vanguard with a fighting 90 (205b, 9x4) in the face of adversity as India were shot out for a below-par 189 in 71.2 on a first day wicket that saw good bounce, low bounce, turn and break.  Break the Indians’ back is what Nathan Lyon did scalping eight of ten, bettering his previous 7-94. The offie used his guile intelligently, spun it proficiently to put the batsmen in doubt to return with a career high of 8-50. All from two spells: 3-40 from an unchanged first spell of 16 and a stunning 5-10 from a second spell of 6.2 overs.

Shades of O’Keefe from Pune? No, way, Aussie’s premier spinner Lyon showed him who the boss was.

Left to negotiate 16 overs, the visitors’ openers David Warner and Matthew Renshaw guided them safely to 40 without loss at close.

Under the cosh after the Pune disaster, India were left searching for clues as Steve Smith’s spinners — Lyon and O’Keefe — continued to do what no other tweaker from their country could do in the past.  Put the hosts under severe pressure.

True, the pitch wasn’t anything like a opening day wicket with enough purchase for the spinners but it wasn’t of the unplayable variety. What was playing on the minds of the batsmen was self-doubt and Lyon, cashing in on their uncertainty plunged the knife to the hilt.

While Rahul, needing some redemption (for himself at least) after the first Test blunder, looked at ease, enjoying the two reprieves the visitors gave him along the way. Only, the Australians weren’t as generous with the rest.

Opener Abhinav Mukund, coming in place of an injured Murali Vijay and playing a Test after almost six years, made no difference, trapped in front by Mitchell Starc’s inswinging beauty.

Rahul found an ally in Cheteshwar Pujara and though Smith sought to up the ante bringing on O’Keefe as early as the 8th over, the duo appeared unhurried, putting on 61 (150b) for the second wicket. Rahul, dropped twice on 30 by Peter Handscomb and then on 61 by Warner at leg-slip, off Keefe and Lyon, continued to bat freely, albeit adventurously.

Pujara’s dismissal at the stroke of lunch, Lyon snaring him with a bat-pad didn’t bode well. What was 72/2 in the first session turned agonising as firstly Kohli fell cheaply for the third time in the series and without playing a shot for the second time in a row.

Padding up to Lyon, Kohli was rocked plumb in front leaving the goodly 20,000 crowd aghast.