Mukund was trapped by a low swinging full toss which hit him above the ankle on the left-peg. 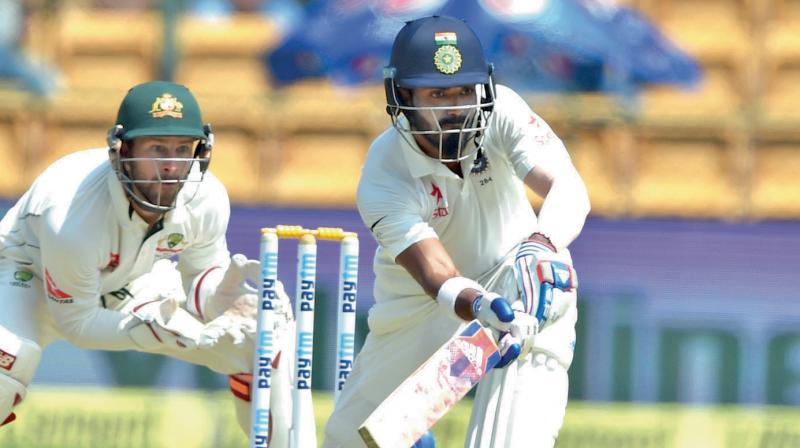 Bengaluru: Five years and seven months is a long time in any sport. Even more so in cricket where an year or more in the woods is almost taking nirvana from the game. In the scenario, it is mind-boggling that opener Abhinav Mukund, out in the wilderness since 2011 gained a lifeline, albeit fortuitously, to pad up for India again.

Having played the last of his five Tests against England at Nottingham in August 2011, the left-handed Mukund recalled into the squad for the one-off Test against Bangladesh last month, opened the innings for the sixth time in his career, with KL Rahul, after a long forgotten debut against the West Indies in June 2011.

Mukund’s start-stop-start career gained a fresh lease of life, though it’s unclear how long, as TN state-mate M. Vijay, on the threshold of a 50th appearance was forced out of the second Test against here owing to a shoulder injury.

The injury which Vijay sustained while fielding in Pune in the first Test didn’t appear alarming enough in the days preceding the second game at Bengaluru, but not getting the all-clear on his left shoulder meant that Mukund opened for the national team in a long while.

Alas, it wasn’t meant to last, at least in the first innings. Lasting just eight deliveries, Mukund was trapped by a low swinging full toss which hit him above the ankle on the left-peg. He didn’t add to his tally of 211 runs from the previous five starts.

It brought into sharp focus the opening conundrum that India’s been facing. “We go in there with the intent to get a big partnership for the team but it hasn’t happened,” said Rahul after his 90.