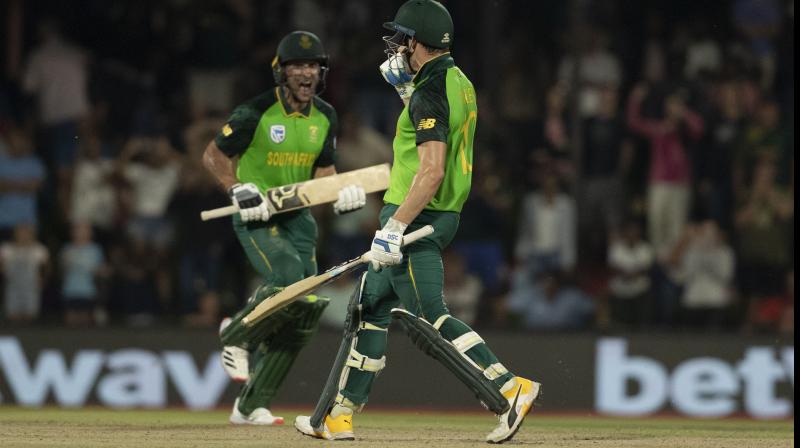 South Africa's batsman Janneman Malan (right) is congratulated by his teammate David Miller after the former completed his century during the second One Day International against Australia at Managing Oval in Bloemfontein on Wednesday. AP Photo

Bloemfontein: Janneman Malan, snubbed for South Africa's upcoming tour of India, hit a match-winning century as the Proteas clinched their one-day international series against Australia with a six-wicket victory in the second match at the Mangaung Oval on Wednesday.

Malan made 129 not out to enable South Africa to chase down a target of 272 and seal the series with a game to spare -- their first win in five series in all formats in home internationals this season.

Malan, 23, was out for a first-ball duck on his ODI debut in the first match in Paarl on Saturday and was not selected in a 15-man squad which will depart on Sunday for a three-game tour of India.

The younger brother of Test batsman Pieter Malan gave credit to Jon-Jon Smuts (41), Heinrich Klaasen (51) and David Miller (37 not out), with whom he shared partnerships of 91, 81 and an unbeaten 90 after captain Quinton de Kock had been bowled in the first over by Mitchell Starc.

Earlier, Ngidi claimed the first three wickets to halt Australia's momentum after David Warner (35) and captain Aaron Finch (65) gave them a fast start.Then he took three more wickets as Australia could score only 49 runs for the loss of six wickets in the last 10 overs of their innings.