The absence of their most experienced seamer Bhuvneshwar Kumar has barely been felt even as skipper Kane Williamson is bullish about Bhuvi’s return. 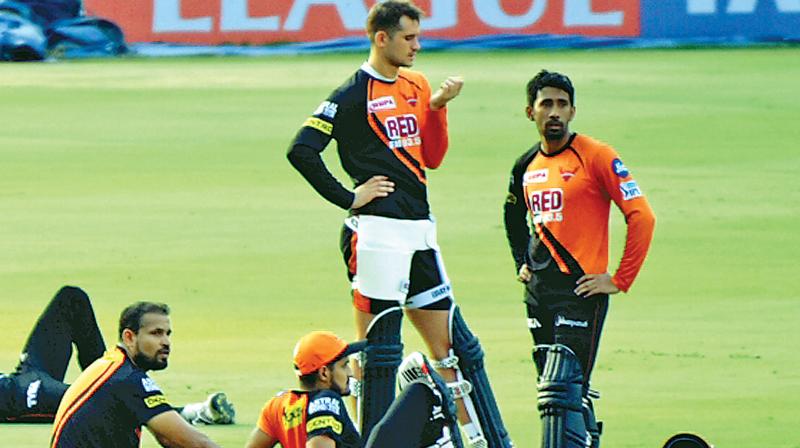 Hyderabad: The rejuvenated Delhi Daredevils are at Sunrisers Hyderabad’s home after registering a thrilling last-ball victory against Rajasthan Royals on Wednesday night. Ever since young Shreyas Iyer took over charge from Gautam Gambhir — under whom the side had managed to win just one of the six matches — Delhi have a ray of hope to make the playoffs.

But on Saturday, here at the Rajiv Gandhi International Stadium, the visitors are tasked with a huge dare, against the Orange Army whose bowling unit has choked opponents at least thrice despite batting failures.

SRH are currently at the top of the table with 12 points from eight games but they will be in no mood to take the sixth-placed Delhi lightly whose young batting department has rattled the opposition bowling line-up recently be it Kolkata Knight Riders, Chennai Super Kings or Rajasthan Royals.

The inclusion of Prithvi Shaw has been a blessing for DD as the 18-year old has provided a solid start to the side while skipper Shreyas and Rishab Pant too have played their parts with some brilliant knocks in the middle.

But the cause of concern for the visitors is their foreign batters — Glen Maxwell and Colin Munro. Both of them have looked off colour and the team would want their big guns to fire. On the other hand, Trent Boult has done his job well with the ball. In nine matches, the Kiwi pacer has scalped 13 wickets.

Talking about Sunrisers, their bowlers have stood up every time the batting unit let them down. The absence of their most experienced seamer Bhuvneshwar Kumar has barely been felt even as skipper Kane Williamson is bullish about Bhuvi’s return.

Sandeep Sharma has troubled the opposition with the new ball while Siddarth Kaul and young Basil Thampi too have stood tall by chipping in. The spin department led by Rashid Khan and Shakib Al Hasan has curtailed the opponents’ scoring rate throughout and it will be interesting to see how some young-but-mature Delhi’s batsmen overcome the best bowling force of the tournament.