Pathan smashed 27 runs of 12 balls to take Sunrisers to victory with 7 wickets to spare. 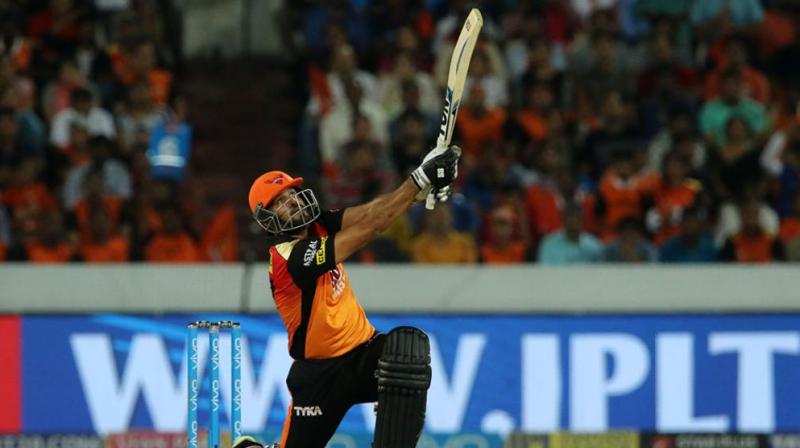 Hyderabad:  Yusuf Pathan was the unlikely hero for Sunrisers Hyderabad as he smashed 27 runs of 12 balls to take his team to victory with 7 wickets to spare in the 36th match of the Indian Premier League played at Rajiv Gandhi International Stadium on Saturday. Kane Williamson remained not-out on 32 runs

Chasing 164 runs for victory, SRH openers Hales and Dhawan went after Daredevils bowling attack right from the word go. Hales got a lifeline when on 9 runs when Maxwell dropped an easy catch of Avesh Khan’s delivery.

Hales made use of the opportunity as he smashed bowlers all over the park. Khan suffered at hands of Shikhar Dhawan, who hit him  for 27 runs in his second over as SRH looked like cruising to victory. The 76 run opening wicket stand was finally broken by leg spinner Amit Mishra. The leg spinner  produced peach of a delivery to dismiss Alex Hales for 45 runs. Dhawan’s innings was also short lived as he was clean bowled by Mishra for 33 runs.

After Dhawan’s dismissal, SRH innings began to slow down as Kane Williamson and Manish Pandey found it hard to get boundaries. Both the batsmen kept on rotating strike to keep the scoreboard ticking.

As the match entered the final five over’s, both the batsman upped their antique. Avesh Khan yet again conceded 10 runs in the 16th over to make the match more interesting. Pandey innings was stopped on 21 runs after Prithvi Shaw took a brilliant catch of Plunkett’s bowling.

Yusuf Pathan received two lifeline after being dropped by Vijay Shankar, when on 0. He then survived an LBW appeal from DD after umpires decision was overturned after a review by the batsman.

With 14 needed of the final over, the responsibility was on Daniel Christian to take DD to victory. Pathan, who twice received the lifeline made use of the opportunity to lead his team to victory .

WICKET! Plunkett gets rid of Manish Pandey, Prithvi Shaw takes a brilliant catch. Is this the turning point of the match?

Two boundaries in a row by Manish Pandey relieves pressure for SRH. With 49 runs needed of 30 balls, the onus will be on Williamson and Pandey to help the team cross the finish line

WICKET! Mishra strikes yet again and this time he dismisses Shikhar Dhawan. The batsman sees a toss up delivery, clears his leg and tries to go onside but misses it completely to find his timber being disturbed

After launching attack on opposition bowlers, Alex Hales was dismissed for 45 runs by Amit Mishra with a jaffa of a delivery to provide DD some lifeline in the match.

WICKET! What a breakthrough for DD. Amit Mishra produces peach of a delivery to dismiss dangerous looking Alex Hales for 45 runs.Mishra bowls the delivery between middle and leg and gets it to turn, as the ball goes past outside edge and hits the off stump.

Chasing 165 runs for victory Hales and Dhawan have provided a decent side to the chase as DD bowlers failed to get early breakthrough.

Dropped! Alex Hales gets lifeline, Glenn Maxwell drops a sitter on 4runs. Will this cost DD the match.

Shaw was finally dismissed by Rashid Khan for 65 runs. Iyer and Rishabh Pant then joined hands both the batsmen put  up 30 run partnership. Iyer’s innings was brought to an end by Siddharth Kaul on 46 runs as DD looked for final flourish in the end.

SRH bowlers made a strong comeback as DD lost wickets at regular interval. The final over by Bhuvneshwar Kumar costed 17 runs with Vijay Shankar smashing a six and a boundary in the same over to help DD end the innings strongly.

WICKET! Naman Ojha goes for 1 run. A mix up between Ojha and Pant resulting in the former finding himself short of crease.

WICKET! Siddharth Kaul has given a big breakthrough for SRH, Shreyas Iyer falls short of his fifty by 6 runs. Full and on leg stump, Iyer goes for a big shot only to find Shikhar Dhawan at  deep mid-wicket.

After Shaw's blitzkrieg, Iyer and Pant will have to perform some pyrotechnique in the final fiuve overs to help DD post big total.

Chance! Saha drops Shreyas iyer of Rashid's delivery. This could have been the second wicket for Afghanistan spinner. Thick inside edge of Iyer's bat and keeper couldn't hold onto the deflection.

WICKET! Rashid Khan with the breakthrough for SRH, Prithvi Shaw departs for 65 runs. Shaw tried to sweep tossed up delivery outside off but finds and edge as the ball goes straight into the hands of Siddharth Kaul at short third man

Prithvi Shaw has led the charge for the men in Red and Blue with a fine half century against a quality bowling attack. The youngster has finding the fences with ease as SRH bowlers have failed to stop the batsman from scoring freely.

50 for Prithvi Shaw. What a knock from the Mumbai youngster at the top of the order. The right-hander took just 25 balls to reach the milestone.

It has been a decent start for Daredevils after Maxwell, who was sent to open the innings was unlucky to get run out after the deflected of Sandeep Sharma's hand and hit the stumps to give SRH an early breakthrough.

Daredevils bring in two changes in their side. Dan Christian and Naman Ojha come in place of Colin Munro and Shahbaz Nadeem

Preview:It is the battle of two teams that have been separated by 6 points on the Indian Premier League points table. High flying Sunrisers Hyderabad will take on bottom placed Delhi Daredevils in the 36 th match of IPL to be played at  Rajiv Gandhi International Stadium on Saturday.

Sunrisers Hyderabad have been in terrific form, especially their bowlers who have defended low scores of 132 runs and 118 runs in their previous games. Inspite of absene of  star bowler Bhuvneshwar Kumar, SRH pacers Sandeep Sharma, Siddharth Kaul and Basil Thampi have proved to be handy for the opposition.

Captain Kane Williamson has been among runs and will look to continue his fine form.

The team sitting pretty at the top of the points table gives Manish Pandey the cushion to Shikhar Dhawan, who suffered injury will look to regaining the form in the clash against the side, who are stranded at bottom

For Delhi Daredevils, change of captaincy has got their campaign back on track. The Shreyas Iyer-led side registered two wins in their last three games. The boys from the capital city won their matches against Kolkata Knight Riders and Rajasthan Royals, while coming close to beating MS Dhoni-led Chennai Super Kings.

Shreyas Iyer, Rishabh Pant and Prithvi Shaw have been in fine form with the bat. Iyer have relished the role of captaincy and have been leading from front with the bat , Pant’s big hits has entertained the crowd and Shaw has been in sublime form as an opener in absence of Gautam Gambhir.

With the ball, Avesh Khan and Trent Boult have been in fine form. Liam Plunkett with his pace will be a serious threat if the pitch offers  extra bounce.

In the spin department Iyer can turn to veteran Amit Mishra, and Shabaz Nadeem.  Maxwell has shown the knack of providing breakthrough when the team needs the most.

It would be interesting to see as to which kind of bowlers will find help from the 22 yard strip.

The match is scheduled to start at 8 P.M. IST on Saturday (May 5th).