It might all have been very different had Pakistan not dropped 2 straightforward catches when Yuvraj Singh was on 8 and Virat Kohli on 43. 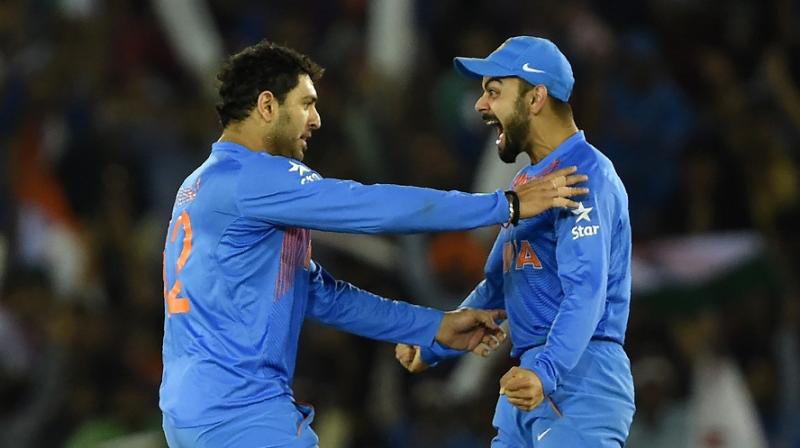 Yuvraj Singh's speed of scoring gave Virat Kohli time to find his touch during a 3rd-wicket partnership of 93 in 59 balls. (Photo: AFP)

Birmingham: India captain Virat Kohli praised Yuvraj Singh's "game-changing" quality after seeing his side launch their Champions Trophy title-defence with a 124-run rout of arch-rivals Pakistan at Edgbaston on Sunday.

Yet the way the experienced left-hander -- Sunday's match was his 297th one-day international -- took just 32 balls to score his runs saw the 35-year-old named man-of-the-match.

His speed of scoring gave Kohli, who initially struggled for fluency, time to find his touch during a third-wicket partnership of 93 in 59 balls that took a game of several rain interruptions away from Pakistan.

In the end, Kohli was in complete command as India scored an astounding 72 runs in their last four overs, with Hardik Pandya hitting three successive sixes off left-arm spinner Imad Wasim just before the innings ended.

Yet some of Yuvraj's shots were breathtaking, particularly the way in which he drove a near yorker from paceman Hasan Ali down the ground for one of his eight fours.

"I felt like a club batsman while playing alongside Yuvi, the way he was hitting the ball. He took all the pressure off me and played the way only he can."

It might all have been very different had Pakistan not dropped two relatively straightforward catches when Yuvraj was on eight and Kohli on 43.

But there was no denying the way India rose to the occasion in front of a capacity crowd as they recorded their seventh straight win over Pakistan at an International Cricket Council global event.

"The way we played and the confidence we showed was very pleasing, the guys were raring to go and willing to take up the pressure," said Kohli.

"From a team point of view this was a massive win for us at the start of a big tournament."

Pakistan, by contrast, wilted in what is cricket's most high-profile fixture, with an estimated television audience of a billion in addition to a capacity crowd of 24,000 that created a raucous atmosphere at Edgbaston.

This was Pakistan coach Mickey Arthur's first direct involvement in cricket's fiercest rivalry, with Sunday's match taking place in Birmingham -- a city with one of the largest Asian populations in Britain.

The South African, in common with players from both sides, had tried to downplay the fixture as no more important than any other game.

But that message did not get through to several members of Arthur's team, with paceman Wahab Riaz losing the plot completely during a wicketless return of none for 87 in 8.4 overs which ended when the left-armer fell in his delivery stride and went off with an ankle injury.

But Arthur was angry at suggestions that Wahab had come into the match carrying an injury.

"Let's get something straight first off. Wahab Riaz was fully fit. He went through a fitness test; he was declared fully fit," Arthur insisted.

"He performed poorly and I'll take the blame.

"I selected him because I wanted him to perform a role. He didn't execute that role, unfortunately.

Wahab's ankle knock meant the tailender was unable to bat in a sedate run chase that never got going before Pakistan eventually slumped to 164 all out.

"The only thing I can think is the magnitude of the situation got to them," said Arthur, a former coach of both South Africa and Australia.

"But we'll bounce back from it," insisted Arthur, whose side must beat South Africa at Edgbaston on Wednesday to have any hope of reaching the semi-finals.