Pakistan never got going in their reply were all out for 164 chasing a revised Duckworth/Lewis total of 289 in 41 overs. 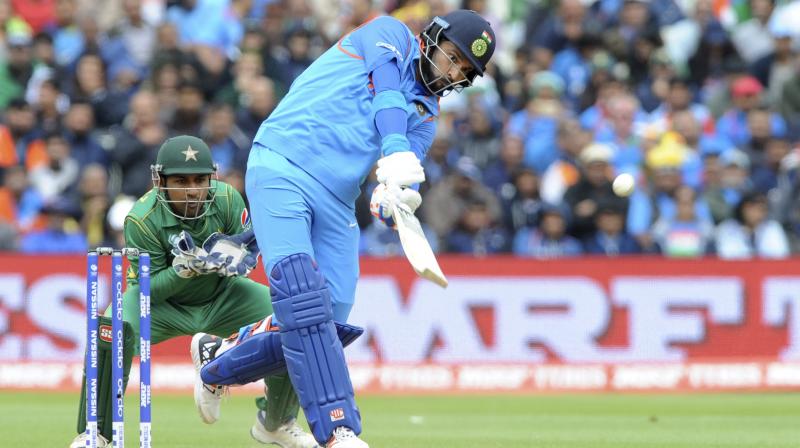 Yuvraj Singh’s master-class from 32 balls helped India post 319 for three in their 48 overs in a match interrupted by rain. (Photo: AP)

Birmingham: India thrashed Pakistan by 124 runs by D/L method in their Champions Trophy opener at Edgbaston on Sunday.

Pakistan, set a revised target of 289 in 41 overs following three rain interruptions, finished on 164, with injured last man Wahab Riaz unable to bat as India won with 44 balls to spare.  India had previously piled up 319/3 in 48 overs after Pakistan captain Sarfraz Ahmed won the toss.

Rohit Sharma top-scored with 91 and put on 136 for the first wicket with Shikhar Dhawan (68). India captain Virat Kohli made 81 not out, sharing a quickfire third-wicket stand with Yuvraj Singh (53) as Pakistan paid a heavy price for dropping both batsmen.

India plundered 72 runs in their final four overs as Pakistan’s attack wilted. Pacer Umesh Yadav was the most successful bowler finishing with figures of 3/30.

Earlier, Kohli and Yuvraj made Pakistan pay for fluffing catches as they each struck quickfire fifties.

Kohli was equally contemptuous of Pakistan’s attack during a blistering innings of 81 not out off just 68 balls that included six fours and three sixes.

Left-hander Yuvraj smashed a rapid 53 while helping Kohli add 93 for the third wicket in a mere 59 deliveries.

That was not the end of the run spree, with Hardik Pandya hitting the first three balls of left-arm spinner Imad Wasim’s last over of the innings for six on his way to an unbeaten 20.

Rohit Sharma (91) and Shikhar Dhawan (68) laid the platform with an opening stand of 136 before Kohli and Yuvraj, to the delight of India fans in a capacity 25,000 crowd, teed off.

Mohammad Amir was the pick of Pakistan’s attack with none for  32 in 8.1 overs. But fellow left-arm fast bowler Riaz was hugely expensive, his wicketless 8.4 overs costing 87 runs.

Wahab’s day was summed up when he was unable to complete his ninth over after falling awkwardly in his delivery stride.

Pakistan captain Sarfraz Ahmed won the toss in what was the opening Group B match for both rivals in a tournament featuring the world’s top eight one-day international teams.

India’s openers made an initially cautious start before they upped the tempo either side of a 50-minute rain break.

Sharma, however, was fortunate when, on 21, he edged Amir just beyond a diving Azhar Ali at slip for four.

Pakistan were donated a wicket, however, when Dhawan hoisted a full toss from leg-spinner Shadab Khan straight to Azhar Ali at deep midwicket.

There were times when Pakistan’s bowlers, Wahab apart, maintained the disciplined line and length needed on a good batting pitch.

Sharma went 43 balls without a boundary before cover-driving and pulling Wahab for a four and a six off successive deliveries. But in sight of what would have been his 11th ODI hundred, Rohit was run out when he just failed to beat Babar Azam’s throw to wicket-keeper Sarfraz after Kohli called him for a tight single. It was the end of a 119-ball innings featuring two sixes and seven fours.

Man of the Match: Yuvraj Singh