ICC CWC'19: Key players to watch out for in Pakistan-Bangladesh clash

As of now, Pakistan are placed fifth in the points table with nine points from eight matches played so far. 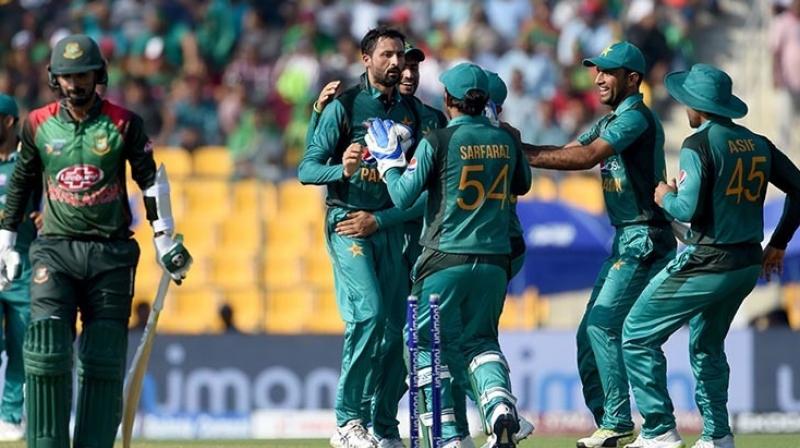 Pakistan's hope may even end at the toss, as Pakistan will be out of the semis race if Bangladesh opts to bat first. (Photo: AFP)

New Delhi: Pakistan will lock horns with Bangladesh on Friday in the hope to make it to the semi-final spot in the ongoing ICC Men's Cricket World Cup.

As of now, Pakistan are placed fifth in the points table with nine points from eight matches played so far. To surpass New Zealand and secure a semis berth, the team will have to score 450-odd runs and defeat Bangladesh by 316 runs to qualify with the required net run rate.

Pakistan's hope may even end at the toss, as Pakistan will be out of the semis race if Bangladesh opts to bat first.

Bangladesh, on the other hand, are out of the tournament, as they only have seven points from their eight matches.

Shakib moved to the top in the ICC ODI rankings for all-rounders last month. The 32-year-old has been in sensational form in this World Cup as he is the second-highest run-scorer in the tournament so far. The left-hander has scored 542 runs in the World Cup till now. Shakib is a vital member of the Bangladeshi side. Apart from his batting, he also bagged 11 wickets.

Pakistan pacer Amir, who did not find a spot in the initial 15-member squad announced, proved his worth in the team as he took five wickets against Australia and conceded just 30 runs from his 10 over quota. He then went on to take three Indian wickets and two South African wickets, respectively. Amir has 16 wickets under his belt in the tournament so far.

The 32-year-old batsman has been in an exceptional form for Bangladesh. He is the second-highest run-getter for the team after Shakib. The left-handed batsman has amassed 351 runs in the tournament so far. He provides the batting stability in the middle-order.

Babar has been a brilliant player for Pakistan in the last couple of years and the stats do the talking for him. He played an amazing knock of 63 runs against the hosts England in their second World Cup match and helped his side beat England by 14 runs. Babar went onto complete his century against New Zealand as he scored 101 not out to defeat Kiwis. He is the leading run-scorer for Pakistan in the tournament as he scored 378 runs so far.