The Mumbai Indians player has garnered 145 runs at a strike rate of 150. 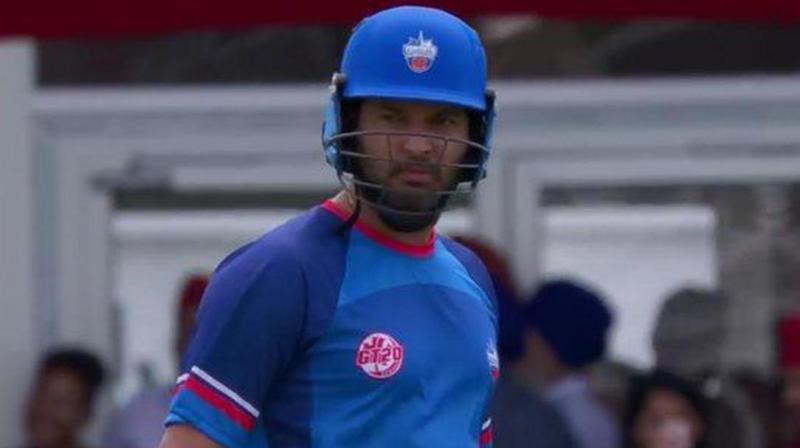 Yuvraj Singh, who recently retired from international cricket, is currently playing for the Toronto Nationals in the Global T20 Canada. (Photo: twitter/ screengrab)

Mumbai: Yuvraj Singh, who recently retired from international cricket, is currently playing for the Toronto Nationals in the Global T20 Canada.  Despite a sluggish start, the 37-year-old former Indian cricketer is still showing his fitness form.

The Mumbai Indians player has garnered 145 runs at a strike rate of 150. Moreover, Yuvraj is also the top scorer for his team. In the last three matches, the World Cup winning captain has scored 35, 45 and 51.

Yuvraj, who is also the captain of the Toronto Nationals, has played an innings which unfortunately came in a losing cause. The Toronto Nationals’ captain scored 51 from 22 balls as his team fell short of 11 runs while chasing a mammoth target of 223.

However, regardless of Yuvraj’s knock, the 37-year-old did an impressive stunt which grabbed everyone’s attention.

Recently, Yuvraj was criticised for his fitness, but during the match against Brampton Wolves, Yuvraj pulled off a stunning catch to dismiss Lendl Simmons, who along with George Munsey got his team to a flying start with some sixes. The duo was looking dangerous as they put on 29 runs in just 3.1 overs.

Lendl Simmons, who was blasting every delivery off towards the boundary, had hit the ball towards Yuvraj at mid-off. Following that Yuvraj who was in the process to catch the ball, had made a mockery of it in the first attempt as the ball went out of his hands and hit his chest and again went out before Yuvraj dived and grabbed the catch.