Following Phil Hughes tragic incident in 2014, the ICC has asked all international cricketing nations to adopt the same Helmet standard. 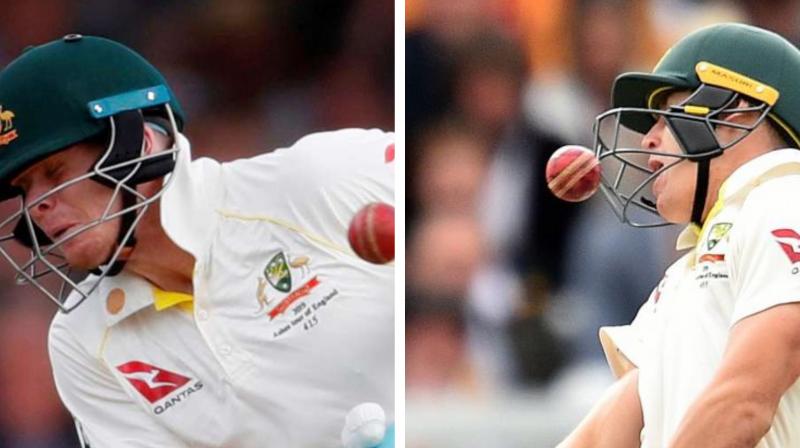 Steve Smith suffered a delayed concussion after being hit on the neck and was later ruled out of the third match, which England won. Marnus Labuschagne, who replaced Smith as test cricket’s first concussion substitution, was struck on the protective face grill of his helmet on his second ball. (Photo:AFP)

Mumbai: After Steve Smith was hit by a deadly Jofra Archer’s bouncer, that felled the Smith, the star of the first Ashes Test match, the International Cricket Council's (ICC) move to introduce anti-concussion guards and concussion substitute were felt like they were long need of the hour .

Not only did the global governing body of cricket introduced protective helmets and guards, the body also introduced concussion substitute for first time, especially after Jofra Archer’s bouncer felled Steve Smith, who won the first Ashes Test match for Australia with two match winning scores of 142 and 144 in a single match.

The introduction of anti-concussion helmets and guards was in long need of the hour, especially after the death of Australian cricketer Phillip Hughes when he was hit under the helmet on the neck during a Sheffield Shield match by a fast delivery.

Recently in 2016, during a Test match between Bangladesh and New Zealand, New Zealand’s Neil Wagner was hit on the helmet thrice by bouncers in quick successions, while Bangladesh’s Mushfiqur Rahim got hospitalized due to a mild concussion, although both the teams neglected the matter, counting it as a part of the game and a strategy.

Many such incidents have occurred, but the matters were down played by the teams. However, the England and Wales Cricket Board (ECB) has always been encouraging all cricket clubs and cricketers to review their existing head protector equipment.

The designs and manufacture of cricket head protectors is currently controlled by British Standard BS7928:2013.  And, the ICC also adopted the same standard as the international standard.

ECB has always mentioned in the professional player’s contract that any helmet provided to a player by his employer club must meet this safety standard. Following Phil Hughes tragic incident in 2014, the ICC has asked all international cricket playing nations to adopt the same Helmet standard.

However, the ICC hasn’t made it mandatory to wear the anti-concussion helmets that are attached with neck guards, but it has stated that wearing this protective equipment will certainly save the player from being critically injured. Since the ICC’s directives, all cricket playing nations have started using those protective gears, starting from Australia in 2015.

The ICC introduced the new regulations on February 1, 2017.  Moreover, the cricket governing body also directed that a batsman must wear a helmet which is equal to the standard as prescribed by the global cricketing governing body.

Meanwhile, ICC’s recent move to introduce a concussion substitute was embraced by cricketers and the cricket experts.  Steve Smith, who was hit by deadly bouncer during the second Ashes Test, had to sit out of the third Ashes Test which England won in Smith’s absence.

However, in his absence, Marnus Labuschagne replaced him and he went on to play a crucial match turning moment for his team. Even Labuschagne was felled by Archer’s career-threatening bouncer, but luckily Marnus’ case wasn’t as severe as Smith’s.

The move was initially introduced by the Australian Cricket board (Cricket Australia) in early 2018, for its professional domestic league. The same was implemented by ECB in 2018. And, after successful outcomes, the ICC decided to introduce Concussion substitute in international stage.

The rule finally came into effect from August 1, 2019, during the first Ashes Test. And, after Smith’s incident, it became imperative that the ICC introduced this rule. Another case was observed during India West Indies Test series, when Jasprit Bumrah’s stunning bouncer felled West Indian Darren Bravo who had to be replaced by Jermaine Blackwood during the second Test match.