After claiming his 27th five-wicket haul in Tests on Friday, Ashwin showed that he remained India's go to spinner in home conditions. 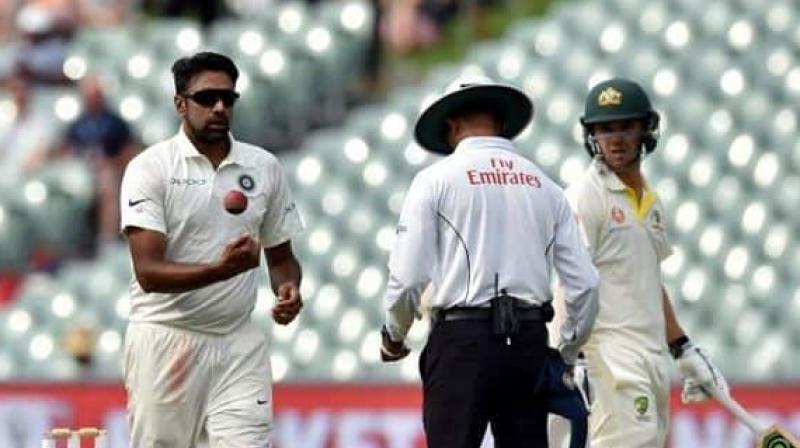 The offie said not playing regular cricket for India also made him realise how much he loves bowling. (Photo: AFP)

Visakhapatnam: Ravichandran Ashwin, playing his first Test match since December last year, says he badly missed playing for India in the last 10 months, so much so that the wily off-spinner stopped watching the game.

The 33-year-old, who has been playing only one format for India since July 2017, last played the Adelaide Test from December 6 to 10, the first of the four on the tour of Australia.

To his disappointment, Ashwin did not feature in the playing eleven in the following Test series against the West Indies in August-September when India only played one spinner in Ravindra Jadeja.

"To stay away from cricket itself was very tough for me. In order to substitute, I played whatever games I got. I tried and made opportunity for myself to go and play some county cricket (for Nottinghamshire). I tried and played the TNPL as much as I could, played some league cricket in Chennai," he said.

"It was very important to tick those numbers off because that is essentially where I came from. Going back and playing there is probably the best thing that could have happened," said Ashwin, who when asked about time away from national duty.

After claiming his 27th five-wicket haul in Tests on Friday, Ashwin showed that he remained India's go to spinner in home conditions.

Asked how spent his time away from the spotlight, Ashwin said: "I felt like every time I watched the game on TV I felt like wanted to play the game.

"I was missing out I felt, it is very natural. I just wanted to play. Everybody goes through it. But that's not the end. I tried different things in my life.

"My life has revolved around cricket for the last 25 years. I thought my life, my family everybody deserved a bit more of my time so I tried to spend time away from the game. I discovered other interests (reading archaeology books was one of them). I did not fret too much about the game."

Fitness issues had sidelined him on the tour of Australia.

Asked how he dealt with it, Ashwin said: "In terms of addressing injuries and why it happened, it is best for the medical staff to do it. For me I felt like all of a sudden I wasn't playing all formats of the game.

"I was playing 12 months a year and up and down spike in workload probably would have caused it. That is why I went back and played wherever I got an opportunity and from my side I can tick those boxes and see how my body copes with it," he said.

Ashwin enjoyed his county stint in England where he even dismissed South African opener Dean Elgar, who got the better of him here on Friday.

The offie said not playing regular cricket for India also made him realise how much he loves bowling.

"For me it is about playing the game and I have realised that the joy of the game has to be back in my heart. I made sure that I enjoy the game where ever I go and play. That I thought to an extent was quite visible when I played yesterday."

Talking about South Africa's fightback in the ongoing first Test, Ashwin said Elgar and Quinton de Kock deserves all the credit for playing the way they did.

"It is a proper Test match pitch. You expect two teams to bat well don't you? I thought they batted really well. Whenever the ball spun, it spun from far distances not from the normal length.

"We might have given them few too many runs in the morning session which probably gave them the momentum. You expect a good side to play the way they did. So credit has to be given where it needs to be given," he said.

"We came back in the back half of the day. That is how Test cricket is supposed to be," Ashwin added.