The partnership was Chennai’s best opening stand in the Twenty20 tournament as the MS Dhoni-led team bounced back after three losses. 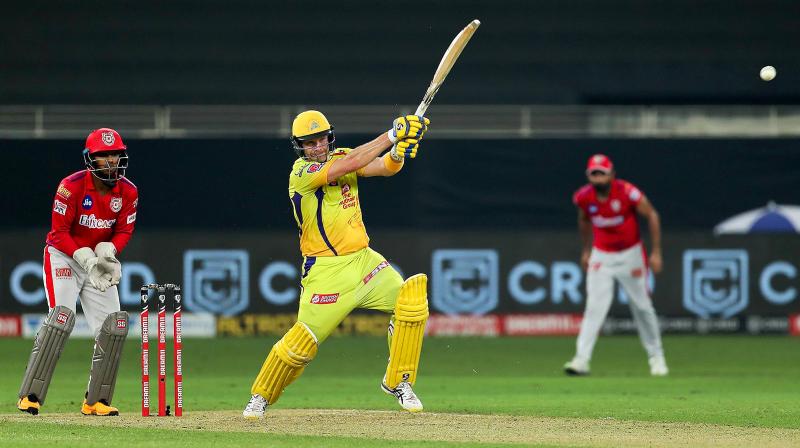 Watson (83 off 53 balls) hit his first half-century of the season and together with Du Plessis, who smashed 87 of 53 balls, led Chennai past Punjab’s 178 for four. (Photo | PTI)

Dubai: Shane Watson and Faf du Plessis conjured up commanding unbeaten half-centuries as Chennai Super Kings demolished Kings XI Punjab by a whole 10 wickets to snap their string of losses in the IPL here on Sunday.

CSK relished a much-needed victory after three defeats in a row, overhauling a 179-run target with remarkable ease.

Watson (83 not out) and Du Plessis (87 not out) ensured that there was no close finish this time, reducing the match to a ‘no-contest’ with their authoritative batting.

The seasoned Australian punished the KXIP bowlers with 11 fours and three sixes in his 53-ball unbeaten knock while Du Plessis hit 11 fours and a six from 53 balls to also remain not out.

Except Mohammed Shami, KXIP did not have a bowler who could trouble the opposition batsmen and CSK exploited it to the fullest. CSK moved to sixth spot from bottom with this confidence-boosting win.

Skipper KL Rahul had hit a well-paced 63 to lead Kings XI Punjab to a competitive 178 for four after electing to bat but in the absence of good bowlers it was an onerous task to stop the experienced CSK brigade.

Rahul’s risk-free 63 came off 52 balls with the help of seven fours and a six as he shared a 61-run stand with fellow opener Mayank Agarwal (26) and then raised a 58-run partnership with Nicholas Pooran (33 off 17).

KXIP looked set for a bigger total but both Pooran and Rahul were dismissed by pacer Shardul Thakur off successive balls in the 18th over.

CSK, like their rivals, also got to a solid start with openers—Du Plessis and Watson—creaming off 60 runs in the Powerplay overs.

They did not exactly set the field on fire but an effective strokeplay helped them begin the chase in right earnest.

The Australian-Protea duo blended caution with aggression, picking the right deliveries to attack. They raised the team hundred in the 10th over.

Watson got to his fifty with consecutive boundaries off Chris Jordan while Du Plessis raised his own with a single off the same bowler.

With Nothing working for KXIP, Watson and Du Plessis only became more dominant as the game progressed.

Earlier, Rahul and Agarwal were cautious. No lofted shot was played till the last over of the Powerplay with the two batsmen preferring to drive along the ground. It was also because Deepak Chahar and Sam Curran hardly pitched it short.

Even if Agarwal and Rahul opened their arms it was to slap the balls outside the off stump, when there was enough room to do that.

CSK captain MS Dhoni introduced spin in the seventh over with Ravindra Jadeja, who created a chance too but Agarwal’s hit fell just short of a diving Du Plessis.

Leg-spinner Piyush Chawla succeeded in getting the breakthrough when Agarwal pulled one straight to Curran. The openers added 61 runs in 8.1 overs.

Mandeep Singh, playing his first game of the season, joined his skipper and made an impact immediately. He creamed off two sixes off Chawla in the 11th over to start the fireworks.

Jadeja soon got rid of dangerous-looking Mandeep, who scored 27 off 16 balls.

Rahul, who had adopted a risk-free approach till then, completed his half-century with a six off Thakur and followed that up with a four. Nicholas Pooran too looked for boundaries as KXIP began the acceleration.

The West Indian hit three sixes in his short 33-run knock, which ended while looking for another big shot off Thakur. He added 58 runs with Rahul, who was out next ball, caught behind. It was Dhoni’s 100th catch in IPL.