After tying the knot, the former Proteas captain took to twitter and uploaded the moments from the special occasion. 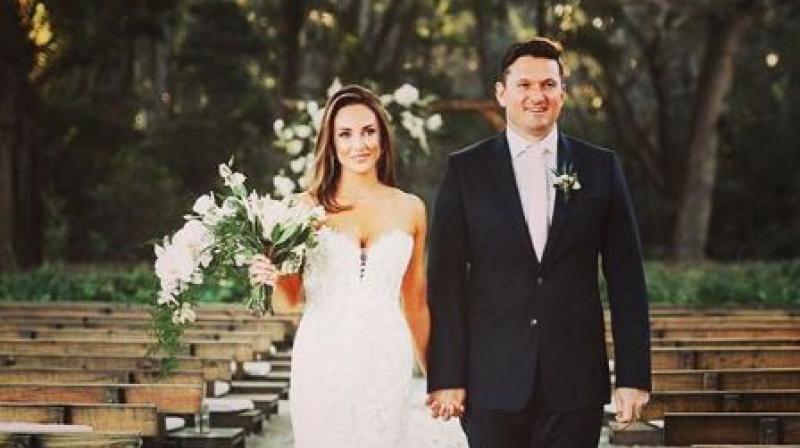 After tying the knot, the former Proteas captain took to twitter and uploaded the moments from the special occasion.

In 2014, the 38-year old left-handed batter got earlier married to Irish pop singer Morgan Deane, and also during the same year, he separated from Deane.

From the previous marriage, Smith has two kids – Cadence (7) and Carter (6). The Proteas legend also has two-year-old Sebastien from Romy.

Coming back to his wedding moments, Smith got engaged with Romy in 2018 and, ultimately, the couple got hitched.

Smith captioned his photo as – “2 November was an incredible day!!.” The ex-cricketer also stated the wedding took place on Saturday.

Last week, Smith posted a picture on Instagram, in which he can be seen hugging his wife Romy. Smith gave a photo caption, which read “3 sleeps”.

Interestingly, his marriage occurred on the same day when the South African rugby team had won the Rugby World Cup by defeating England in the finals.

This was their third marriage and the day on which they got married made the occasion worthwhile.

Three years back, Romy told the reporters that she got completely stumped after she met Graeme Smith, whom she found very down-to-earth. “He’s a stable person and we have the same values and interests,” Romy had said in 2016.

Graeme Smith, who took over the role of captain at the age 22 in 2003, remains to be South Africa’s one of the best captain and batsman. The southpaw has led South Africa to 53 wins from 108 games in Tests, 92 wins from 149 games in ODIs and 18 wins from 27 matches in T20Is. In his entire career, Smith has hit 17000 runs across all formats, including 37 international tons.

Smith has a career best score of 277 in Tests and 141 in ODIs. With 9253 Test runs, Smith remains the third-highest scorer for the Proteas in red-ball cricket. Now, Smith can be seen making daily appearances as a cricket commentator and an analyst.

Pictures from the special occasion

I am not often at a loss for words, but today I am. There are no words to describe the perfection of our special day. To say everything exceeded all our expectations is an understatement to say the least. We cannot thank all our family, friends, venue hosts and incredible service providers enough. My cup runneth over. That is all ❤️