We need a big total in 2nd innings: Cheteshwar Pujara

Unfortunately for Virat Kohli’s men, it was one of those days when Ashwin asked questions but wasn’t successful. 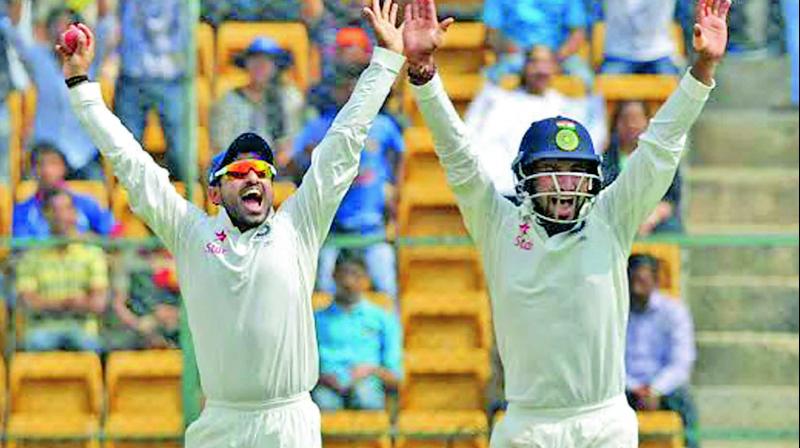 Karun Nair and Cheteshwar Pujara appeal for a wicket. (Photo: Shashidhar B)

Bengaluru: It was an up and down day for India where there were periods of slight dominance before the Australians negated it with some stubborn play. Cheteshwar Pujara, one of the many close-in fielders that India employed — and it was a long day at short-leg for the Indian as R. Ashwin kept plugging away at one end relentlessly — knew it first-hand.

Unfortunately for Virat Kohli’s men, it was one of those days when Ashwin asked questions but wasn’t successful. With the Aussies leading by 48 and counting, on a surface that’s proving tricky, Pujara, having batted on the first morning, realises the need for a quick wrap of the visitors’ innings on the morrow before a better batting show in the second, as the only way for a comeback.

“Our first task is to pick up the remaining four wickets. As far as our batting is concerned, the bigger the total the more pressure the Australians will feel,” said Pujara after the second day’s play.

Three times in the series, the Indians are yet to cross 200 but Pujara is confident that they can put up a good total here.

“We have spoken about how to go about our batting in the second innings and I don’t want to reveal it here. But it is important that we put up a big total on the board. I think there is nothing wrong with the Indian batting line up and we are known to play spinners well. Apart from last three weeks, we have been batting well. So we just have to have a game plan.”

With Kohli pinning his faith on Ashwin - the offie bowled 35 on the day — there was a feeling that Ravindra Jadeja was under-utilised. Pujara explained thus while revealing the wicket got better on Day Two.

Apart from that, as a bowling unit we had to make some changes. (The) fast bowlers (also) had to bowl many overs because the ball was staying low. About the wicket, it got better.”