India suffered a crushing 41-run loss to England in the first T20 of the three-match series here on Sunday. 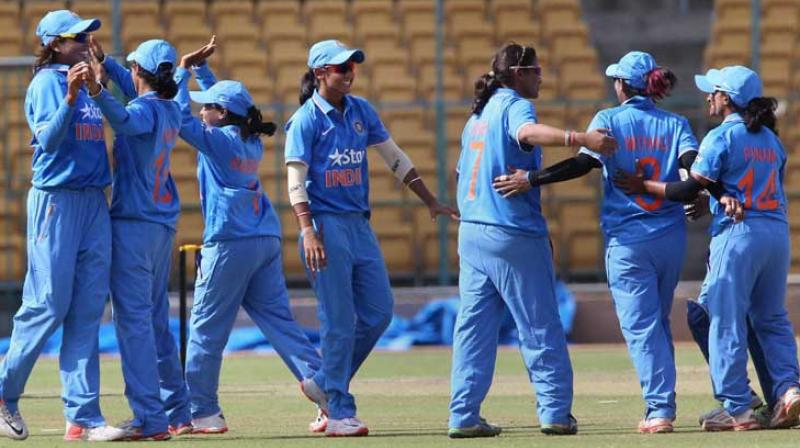 India lost all their T20s in New Zealand after winning the ODI series and things seems to be heading in a similar direction against England. (Photo: PTI)

Guwahati: A desperate Indian women's team would aim to snap its five-match losing streak in the second T20 International against England here on Thursday.

India suffered a crushing 41-run loss to England in the first T20 of the three-match series here on Sunday.

The loss, India's fifth in a row in the shortest format, meant the W V Raman-coached side has a lot of work to do before the T20 World Cup in Australia early next year.

India lost all their T20s in New Zealand after winning the ODI series and things seems to be heading in a similar direction against England.

Chasing England's competitive 160 for four in the series opener, Indian batters cut a sorry figure to be restricted to 119 for six.

After England had put on a competitive total, the onus was on India's top-order to do the job but the quartet of Harleen Deol, skipper Smriti Mandhana, Jemimah Rodrigues and veteran Mithali Raj failed to live to the expectations, seriously hurting the team's cause.

The absence of a power-hitter like Harmanpreet Kaur in the run chase was felt immensely. The regular T20 captain is nursing an injury.

It was a rare failure from Mandhana, that too, on her captaincy debut considering the fact that she has been sublime form off late, plundering runs at will which earned her the ICC Woman Cricketer of the Year award.

In Kaur's absence, ODI captain Mithali was expected to play a bigger role in the three T20s but she failed to seize the opportunity scoring just 7.

And come tomorrow, the 36-year-old, who is likely to retire from the shortest format before the T20 World Cup in Australia next year, would like to make a strong statement.

Veda Krishnamurthy, who made a comeback to the team, looked a pale shadow of herself, struggling to 15 off 25 balls.

Eventually, it was left to the lower-order to do the job and the likes of Shikha Pandey (23 not out), Deepti Sharma (22 not out) and Arundhati Reddy (18) did try but the asking was too tall.

On the bowling front too, India were not up to the mark with the likes of Deepti, Arundhati and Radha Yadav leaking runs.

Medium pacer Shikha Pandey (1/18) and leg-spinner Poonam Yadav (0/18) were economical but they would need support from their colleagues to keep England batters at bay.

On the other hand, Tammy Beaumont (62 off 57), skipper Heather Knight (40 off 20) and Danielle Wyatt (35) looked in great touch as England produced an all-round effort to get the better of the home team in the first T20.